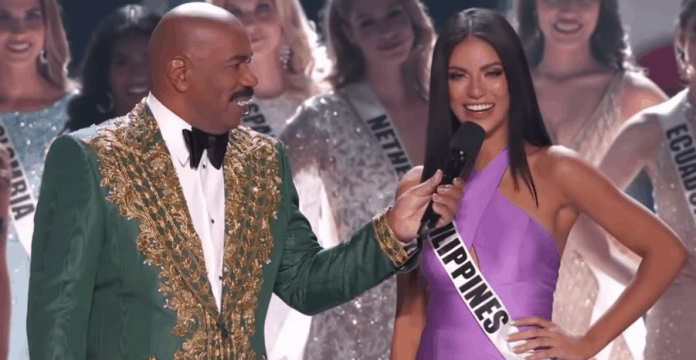 Our girl, Miss Universe 2019 Philippines Gazini Ganados made it to the Top 20, but failed to advance to the Top 10 candidates of the pageant.

As of writing, the Miss Universe 2019 pageant is happening at the Tyler Perry Studios in Atlanta, Georgia.

Gazini was called on to be one of the five wildcard semifinalists to complete the roster of 20, along Brazil, Colombia, India, and Venezuela.

“That was nerve-wracking,” she told host Steve Harvey.

Her opening statement was dedicated to her grandparents who raised her: “The world is aging and my grandparents raised me and I’ve worked in an organization that was supporting for elderly care. I realized that there is stigma between agism, poverty, exclusivity, and invincibility.”

“It is rightful for us to remember that they were the ones who paved the way for us and we should reciprocate that love and no one should ever be left behind,” she added.

The 20 finalists who will be heading to the next round were divided by their region.

The contestants who made it to the roster from the Americas are Puerto Rico, Peru, Dominican Republic, Mexico, and USA.

From Europe were the candidates from France, Iceland, Croatia, Portugal and Albania.

The contestants from the Africa-Asia Pacific regions: Africa, Indonesia, Vietnam, Nigeria, and Thailand.

Only half made it to the next round: USA, Colombia Puerto Rico, South Africa, Peru, Iceland, France, Indonesia, Thailand, and Mexico.

Miss Universe 2018 Catriona Gray from the Philippines will pass on her crown to the next Miss Universe.