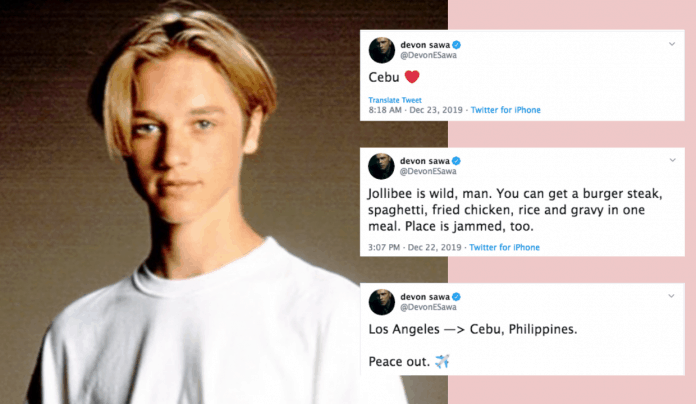 LOOK: Devon Sawa is in the Philippines

Devon Sawa, best known for making us all swoon when he played Casper the friendly ghost, is in the Philippines.

The Canadian actor took to Twitter to announce his arrival in the country last Friday, December 20. A fan tweeted to share that Devon is en route to the Philippines, he corrected her and said he is already here.

In another tweet, Devon expressed his enthusiasm for Filipino fast food restaurant Jollibee.

“I’m coming for you @Jollibee,” he wrote.

True to his words, he had a follow up tweet regarding his Jollibee experience. His tweet read: “Jollibee is wild, man. You can get a burger steak, spaghetti, fried chicken, rice and gravy in one meal. Place is jammed, too.”

On Instagram, he also posted a video showing tricycles and a flooded street with the caption: “We hit some serious terrain.”

“Headed to the underground river,” he said.

His latest tweet, on the other hand, read Cebu with a heart emoji.

It is not known for what reason and for how long the 41-year-old Final Destination actor is here in the country.

He last starred in the 2019 psycho-thriller The Fanatic, directed by Fred Durst and topbilled by John Travolta as a crazed fan obsessed with his favorite actor, played by Devon.