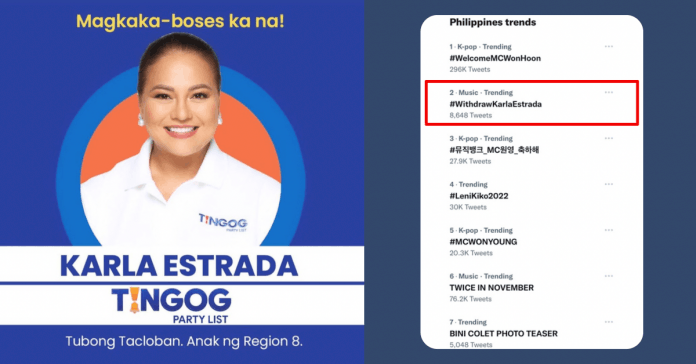 Just hours after Karla Estrada filed her certificate of nomination and acceptance for Tingog Sirangan party-list, netizens ask the television host to withdraw with the hashtag #WithdrawKarlaEstrada.

Kapamilya fans tried to make their voices heard after learning that the current representative of the Tacloban party-list, Yedda Romualdez, was one of the lawmakers who denied ABS-CBN the renewal of their franchise.

As of writing, #WithdrawKarlaEstrada took the second spot on Twitter Philippines’ top trending list with netizens and Daniel Padilla’s fans expressing their disappointment.

Currently, the celebrity mom has yet to address the pleas of netizens and her son’s fans.