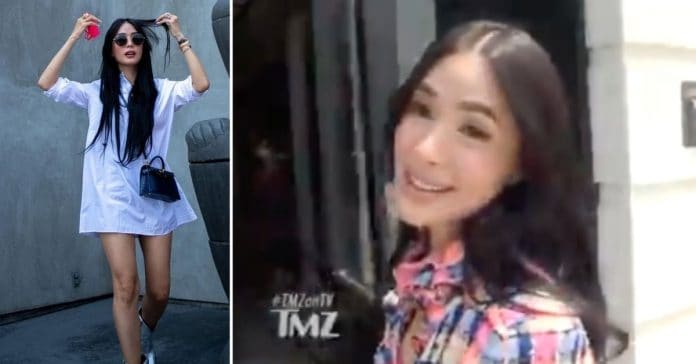 The actress was featured on Hollywood tabloid TMZ while she was out and about in Beverly Hills with Bling Empire star Kane Lim.

In the clip, she shared on Twitter she was described by the TMZ staff as “very, very beautiful” and “a famous Filipino actress”.

When asked if she’s joining the reality show featuring the lives of wealthy Asian-Americans in Los Angeles, Kane answered for Heart: “We don’t know.”

The two were spotted entering a Carolina Herrera store with a production crew. When Heart was asked if it was a confirmation that she will be joining the second season of the show, she gave a vague answer.

“Well, whatever it is, it’s for the Filipinos,” she said.

Heart recently flew to the United States for her work commitments.

RELATED: Is Heart Evangelista the newest star in Bling Empire?

Heart Evangelista shares why her first Paris trip is memorable

Is Heart Evangelista the newest star in Bling Empire?

Heart Evangelista and Lovi Poe are cover girls of LA...