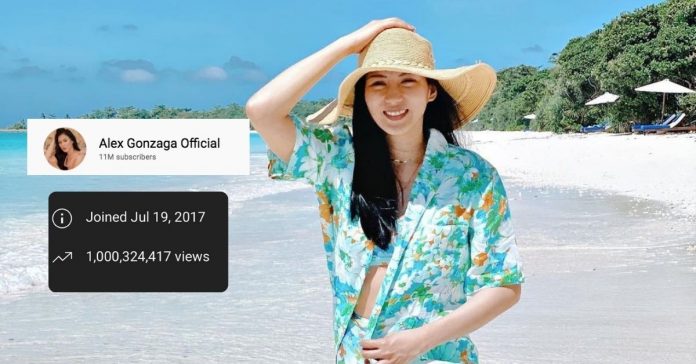 Alex Gonzaga celebrated two wins as she hit 11 million subscribers and one billion views on the video-sharing platform YouTube.

The television host-vlogger made the announcement on social media, expressing her gratitude to her fans as they celebrated their four years together on the platform.

“NETIZENS!!! We are now 11M and we have 1Billion views over all!!!!! Thank you thank you!! Best way to celebrate our 4th year together! To God be the Glory!” she wrote.

Early July, the 33-year-old received her Diamond Play Button from YouTube for amassing 10 million subscribers on her channel. The recognition is the highest award of the three YouTube creator awards.

In a fun vlog, Alex tried to pawn the diamond out of curiosity. In the end, she told her subscribers that the award cannot be appraised because it’s priceless.

She then thanked and dedicated the award to her subscribers for supporting the past four years of her vlogging career.