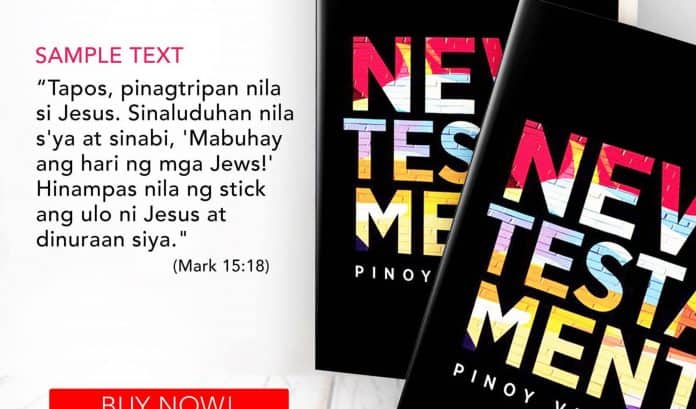 The Pinoy version of the New Testament has been made available for online purchase, but is drawing mixed reactions from netizens for being written in Taglish.

A Facebook post by the Catholic online bookstore St. Paul’s (www.stpauls.ph) on Friday, announced that it was now selling the New Testament: Pinoy Version for P145 only, showing samples of Biblical verses translated into the combination of Tagalog and English languages.

It also said that aside from the Taglish translation, modern-day words were used to make the Word of God more relevant and interesting to the young people.

Some of the sample Bible verses provided are:

As of writing, the post has since received over 1,700 mixed reactions and 800 comments pro and against the Taglish translation.

One commenter said, “I hope the CBCP will look into this. I understand the need to bring the Word of God across everyone in every generation, but not at the expense of sacrificing the richness and contextual meaning of scriptures as translated from the original languages. Language is an important factor in understanding the Bible, translating it however into modern language or everyday speech is not a good idea. Please reconsider the implications.”

“Translations can be done to make the Scriptures more understandable. These are dynamic translations. However, very liberal word choices can lead to the text not being taken seriously. The Filipino translation should be conversational without resorting to slang. An updated Filipino translation of the Bible should be reviewed by reputable persons in the academe,” another wrote.

There were also netizens who welcomed the translation, calling it the new form of evangelization.

“I don’t find it scandalous. This is new evangelization. This is how we can reach even the most simple person. The language may seem uncomfortable but the content is still the same because we are still proclaiming the same Word,” another said.

Despite the surprise reactions in the comments thread of the post, the New Testament: Pinoy Version was actually 10 years in the making before it was published by the Philippine Bible Society (PBS).

PBS is described as a non-profit “ecumenical body made up of Roman Catholics, mainline Protestant churches, Evangelical and free Churches in the Philippines whose mission is to spread the Bible in languages”.

Catholic Bishop Broderick Pabillo, apostolic administrator of Manila, had earlier explained and defended the Taglish version after it was launched late last year.

He wrote that the Pinoy version is intended for people in the National Capital Region, especially the younger generation.

“Pinoy Version is a translation of the New Testament in the language that many people in the Metro Manila and many other Tagalog urban centers use in day-to-day conversation, especially among the educated young people. It is a translation in heterogeneous language, which in common parlance is referred to as Taglish,” Bishop Pabillo wrote in a CBCP article.

“When Jesus became man, he spoke the language of his people. So the day-to-the day language becomes the way that we can know God. Even up to now, the preaching that we hear in Church is Taglish,” he said.

Amid online reactions, St. Paul’s online bookstore posted on Sunday a separate explainer on the New Testament: Pinoy Version, noting that it met the standards of the United Bible Societies, also known as the global network of Bible Societies “committed to the translation, publication and distribution” of the Holy Bible worldwide.

For a copy of the Taglish version, check out this link: https://www.stpauls.ph/products/new-titles/new-testament-pinoy-version/.