Ellen Adarna says no to ‘fat and short’ suitors: ‘I have standards’ 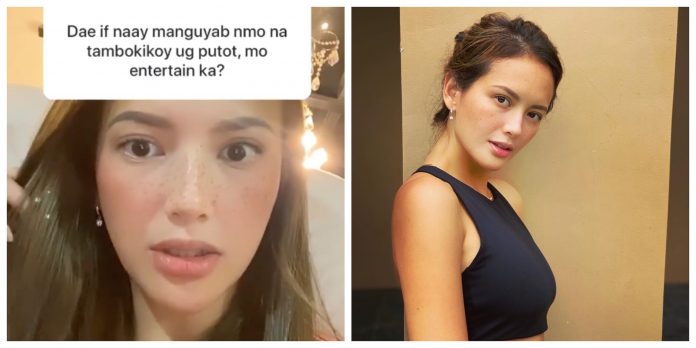 Ellen Adarna treated her followers to yet another Q&A session via Instagram stories. The Cebuana actress, who mostly answered the questions in her native language, was her usual candid self as she dispensed her views on love, relationships and men.

One follower asked her if she’s willing to entertain suitors who are “tambokikoy” and “putot” (Cebuano terms for fat and short).

“Honestly no. You know, naa koy (I have) standards. Putot ko (I’m also short) but I work hard. Naa koy disiplina (I have the discipline) to be fit and healthy,” the 32-year-old actress said in an Instagram story on Thursday.

Jokingly using a certain Cebuano word to explain her reason, Ellen further stressed, “Not for me.”

Nevertheless, she said she has nothing against people who prefer those on the “chubby” side.

When made to choose by a follower between a guy who’s good-looking but not-so-bright or someone brilliant but lacking in the looks department, she said, “Wala. Di ta managinot. (Let’s not settle).”

Ellen also identified the things she finds attractive or not in a guy.

“A guy who can’t keep his word,” she said of a major turn-off. “Labi kanang moingon tomorrow mao na akong buhaton (especially one that says, ‘I’m going to do this tomorrow’), this and that, then di gyud mahitabo (then it doesn’t happen), turn off na ako.”

Ellen, whose former love interests include presidential son Baste Duterte and actor John Lloyd Cruz, was asked if cheating was the reason why she broke up with her past boyfriends.

“Kasagaran sa akong mga uyab day in love gyud kaayo na sila nako, sila pa ang maghilakhilak kay sa akoa. (Most of my past boyfriends, they were so in love with me that they were the ones who cried more than I did.) So the reason of the breakup was that I realized that they’re not ‘the one’ so why would I waste my time? (That’s why) I just left, gwapa ko.”

She also advised those who feel insecure in their relationships to instead focus on working on themselves first. “Pag focus sah sa imong self ‘day para ma secure ka. Di pa man diay ka secure, nagdungag dungag ka lang sa imong problema. (Focus on yourself first girl so you’ll feel secure. Since you’re not yet secure with yourself, then you’re just adding to your problems.)”

Ellen also acknowledged that ever since she doesn’t really care about what people think about her or the things that she says.

Asked if she’s happy, Ellen (who’s reportedly dating a foreigner) said, “I can say I’m happy because I’m not stuck. There’s progress in my life. That makes me happy.”

In 2017, Ellen took a sudden leave from showbiz with John Lloyd to give birth in her hometown in Cebu. The two celebs have since parted ways, but are co-parenting their now almost two-year-old son named Elias Modesto. (READ: Ellen Adarna gets asked: Did John Lloyd Cruz cheat on her?)

Sometime in March, Ellen underwent a mental training program in Bali, Indonesia due to stress she experienced in the last three years. (READ: ‘I was stuck in this black hole’: Ellen Adarna speaks up on her mental training in Bali)

“I did mental training ‘coz I was stuck in this black hole for almost 3 years. My anti depressants didn’t do me any good, it made me immobile and numb. I was getting weaker mentally and emotionally — something had to be done,” she then wrote on Instagram.

“This is not a rehab for addiction. But, a mental training to shift your mindset and body and identity. Because at the end of the day, the demons in your head, it’s all in the mind.”