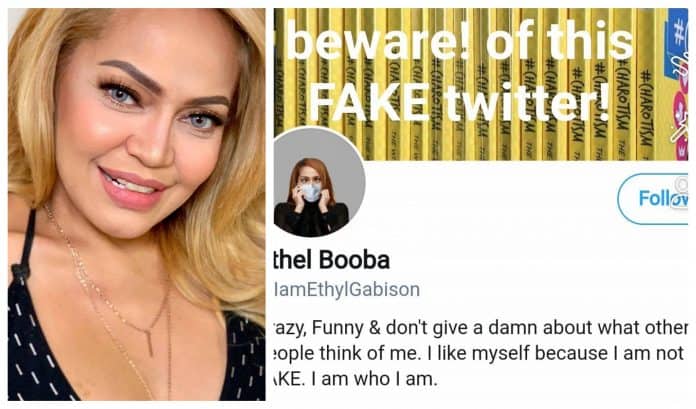 The caption came with the hashtags #StopUsingMyName, #fake, #fakenews and #peke.

On her Facebook page, she also asked her over 40,000 followers to mass report the account. “(I asked) it (to) be reported di ako yan admin nyan. Matagal na akong ginagamit ng Twitter na yan nakakainis na,” she told a commenter.

Prior to her most recent social media posts, Ethel didn’t deny the account as hers although she admitted it was co-handled by other people.

“May mga admin ako diyan,” she said during a 2019 guesting on ABS-CBN’s It’s Showtime.

“Maraming pag-mi-meeting niyan,” she also said, referring to how she composes her tweets.

@IamEthylGabison became popular if not controversial for its funny, hugot and at times political tweets, which she always ended with her signature “Charot!”

Her tweets spawned a book titled #Charotism: The Wit and Wisdom of Ethel Booba released in 2016.

On Friday, Ethel Booba became a trending topic on Twitter as netizens took to the social media platform to express their reactions over the account’s deactivation.