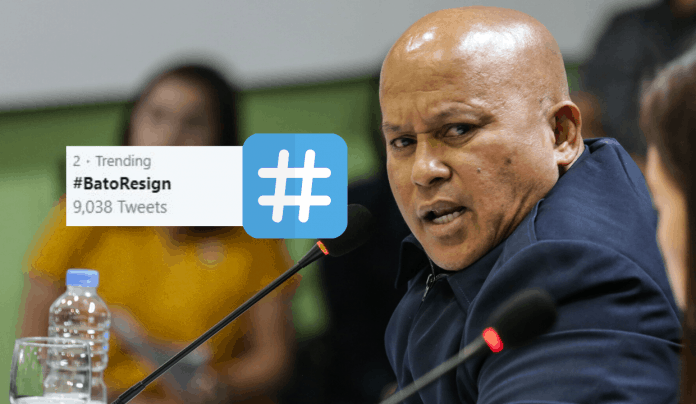 Senator Ronald “Bato” Dela Rosa became a hot topic on Twitter Friday, with members from the online community wishing for his resignation following his comment on ABS-CBN’s franchise renewal issue.

With the hashtag #BatoResign, several netizens aired their sentiments and called on the senator to step down from his position.

Here’s what they were saying:

“Bato” previously engaged in a word war with radio jock DJ Chacha after expressing that he will stand by President Duterte’s decision on the media giant’s legislative franchise.

DJ Chacha then slammed the senator’s “loyalty” to the president and urged him to just resign from the senate and apply as the president’s personal bodyguard instead. (READ: https://latestchika.com/dj-chacha-taunts-sen-bato-dela-rosa-just-resign-and-apply-as-dutertes-bodyguard/).

“When you’re a public servant and your loyalty is towards a person and not towards the country, ang tawag dyan, TUTA,” she also tweeted.

Bato, the former chief police of Davao City at the time Duterte was its mayor, hit back at DJ Chacha’s comment, asking her with what’s wrong being loyal to the president.

“Mali ba ang maging loyal sa isang duly-elected president who is after the welfare of his people and who is willing (to) confront the oligarchs who had been bastardizing this country for so long a time?” Bato told reporters.

The senator also stood firm and said he doesn’t care about the critics who are calling for his resignation.