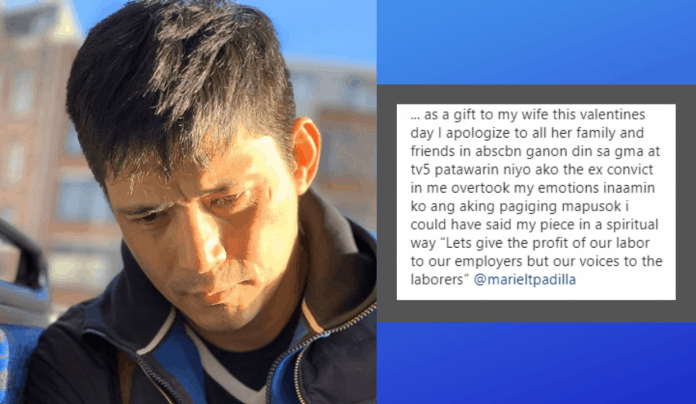 As a Valentine’s gift for his wife Mariel Rodriguez, Robin Padilla apologized for letting emotions get the best of him in his previous statements about ABS-CBN’s franchise renewal issue.

Robin had earlier dared network superstars to reveal their contract details to the public and compare them with ordinary employees’ pay grade in their respective TV stations.

He also called on the big stars of ABS-CBN to discuss the alleged unfair labor practices in the entertainment industry amid its franchise renewal issue.

However, on Friday, the 50-year-old actor said that he got carried away and “the ex convict in me overtook my emotions” while writing his thoughts on the issue.

To recall, Robin got convicted for illegal possession of firearms in 1994 and sentenced to a 21-year prison term. In 1997, he was released from jail after being granted conditional pardon by former Pres. Fidel Ramos. He received absolute pardon from Pres. Rodrigo Duterte in 2016.

Part of his Instagram post on Friday read: “As a gift to my wife this Valentine’s day, I apologize to all her family and friends in abscbn, ganon din sa gma at tv5, patawarin niyo ako, the ex convict in me overtook my emotions, inaamin ko ang aking pagiging mapusok, I could have said my piece in a spiritual way ‘Lets give the profit of our labor to our employers but our voices to the laborers’ @marieltpadilla.”

He also mentioned the harsh reality in show business.

Mariel acknowledged his husband’s gesture and reponded: “Thank you very much!!! I love you ??? I appreciate this so much. Happy valentine’s day.”