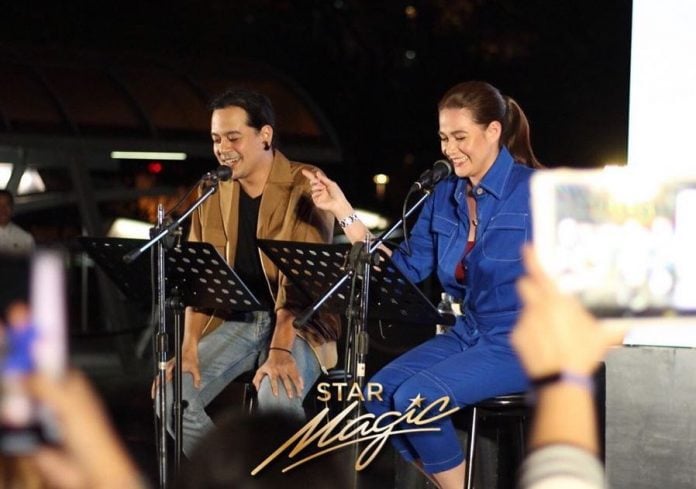 John Lloyd Cruz and Bea Alonzo reunited on Valentine’s Day to do a live script reading of the 2014 hit independent film That Thing Called Tadhana at an open-air venue in Makati City.

The stars, whose love team topbilled several blockbuster films as well as TV series, showed up at the Ayala Triangle after their 2007 movie, One More Chance, was screened to launch Art Fair Philippines’ 10 Days of Art, an ABS-CBN report said.

Everyone knows that John Lloyd’s ex is Angelica but it was Bea who was put on the spot when the actor’s lines mentioned her ex-boyfriend, Gerald Anderson.

To which Bea reacted by playfully slapping the actor’s arm and going off script, “Bakit ba kasi sinulat pa kasi to?”

Nevertheless, the two proved that “it’s Popoy and Basha pa rin” with their chemistry still strong even after years of not acting together in a film or series.

When John Lloyd asked Bea what is it about him that makes him different, the exchange seemingly felt real enough to make the audience forget they were still in character.

Despite being scripted, the audience couldn’t help but react to the dialogues with kilig. And when the script called for a hug on stage, the crowd also erupted in cheers.

John Lloyd and Bea last teamed up in a film in 2015 via A Second Chance, the sequel to One More Chance, the cult classic that introduced their now-iconic characters, Popoy and Basha. Both films were directed by Cathy Garcia-Molina and produced by Star Cinema.

The actor took a leave from showbiz in 2017, but is set to make his big-screen comeback in Lav Diaz’s Servando Magdamag under Star Cinema’s subsidiary Black Sheep.

Bea, on the other hand, will star in a new soap with Richard Gutierrez.