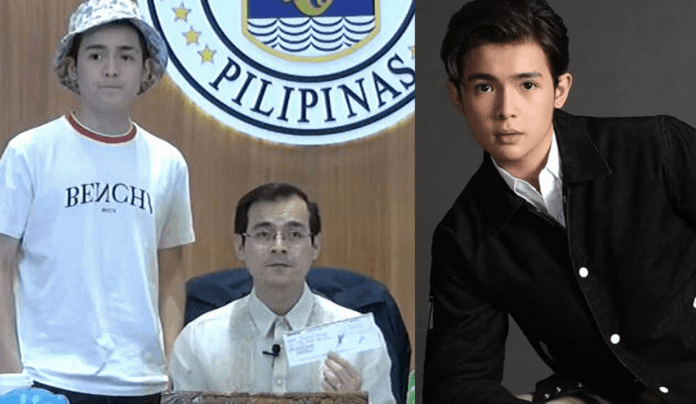 The 18-year-old newbie actor dropped by at the Manila City Hall and visited his father who was delivering a speech during his Capital Report on Friday.

Mayor Isko Moreno got surprised when his son handed him a piece of paper.

“It’s what I got from Bench and Cherry Mobile,” Joaquin told his dad.

The younger Domagoso is an endorser of both brands.

The piece of paper was actually a check showing Joaquin’s cash donation.

Mayor Isko’s son said he got inspired by the act of kindness of the students who were killed in a road mishap when they were on their way home after distributing relief goods to people affected by the Taal Volcano eruption.

“Parang alam mo ‘yun yung tutulong ka na lang tapos ikaw pa yung nadamay sa huli. Napaiyak lang ako parang at least what I can do is to give money for the Taal operations,” he added.

Mayor Isko then showed the receipt of Joaquin’s P50,000 donation.

He then tapped his son’s tummy and said: “O ayan, very good.”

“Nakatuwa naman. Thank you anak. Your mom will be proud of you.”

Mayor Isko had earlier donated P4M of his talent fees from different product endorsements to Batangas residents affected by the Taal crisis.

Street dwellers get food, shelter from Manila city gov’t amid...