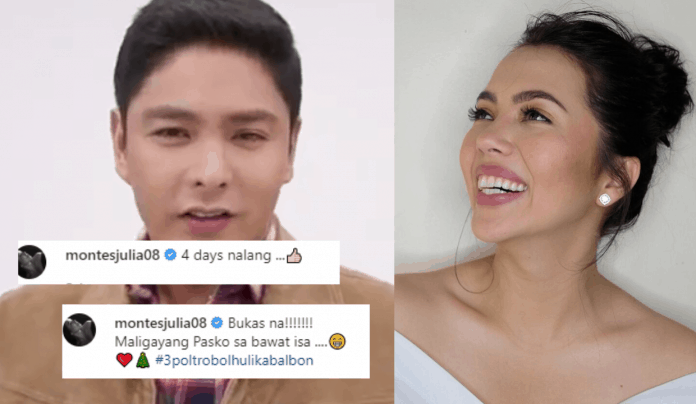 Julia Montes appears to be the No. 1 supporter of Coco Martin.

Check out the Kapamilya actress’ Instagram feed, and you’ll find it “flooded” with posts about Coco’s 2019 Metro Manila Film Festival entry 3Pol Trobol Huli Ka Balbon which will be shown in cinemas on Christmas Day.

Julia has made it like her everyday routine to promote the film on the social media platform.

She started showing support for her rumored boyfriend’s MMFF entry a week ago, by posting the film’s poster, along with a Christmas tree emoji caption.

“5days” wrote Julia in another promo video from Edu Manzano for the five-day countdown.

And onto the next with a video of Sam Milby promoting the film.

She even posted photos of Coco dressed up as his female alter ego Paloma in Ang Probinsiyano during the MMFF Parade of Stars on Monday.

The most recent posts of Julia were Coco’s promotional video and a photo of Coco with Manila Mayor Isko Moreno who also has a guest appearance in the film.

Julia is yet to make her comeback after a over a year of showbiz hiatus. She was last seen on screen in the TV series Asintado in 2018.