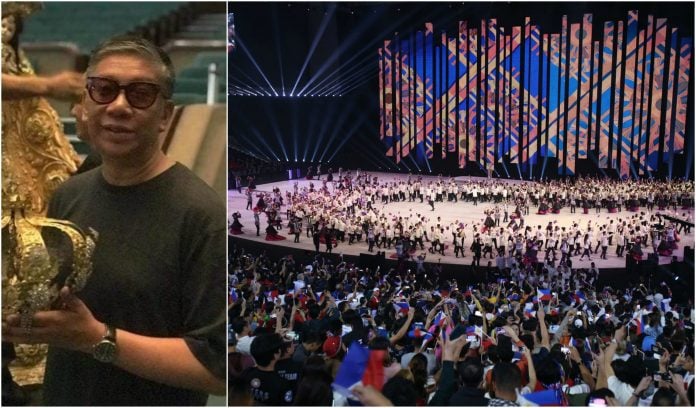 Floy Quintos, creative director of the Southeast Asian (SEA) Games 2019 opening ceremony, took to his social media account to thank the people behind the kickoff event at the Philippine Arena on Saturday, November 30.

In a Facebook post on Sunday, December 1, the veteran playwright and TV director stressed that the event wouldn’t be possible without the “team work” among his creative colleagues, designers, artisans, technicians, managers, as well as the Five Currents, the foreign producer tapped for the ceremony, whom he said was “respectful, systematic and fun to work with.”

“It will always be an honor to have headed such a team as Creative Director together with Libby Hyland (of Five Currents). We Worked and Gave as One,” he wrote in a public FB post.

He was aware of the comments, both good and bad, but shared one that mattered to him the most. It was a post that described the program from the “perspective of a Muslim minority” who could “identify as a Filipino.”

“With so many comments, both positive and negative, here is one post that sums up everything I personally wanted to achieve in the Opening Ceremonies. If our work has sent this message to just one Filipino, then I am satisfied and humbled.”

While direk Floy’s post was swamped with congratulatory messages, one commenter posted a screenshot of the tweet by journalist Raissa Robles about the opening ceremony that it was like she was watching a “perya sa probinsya”.

She questioned why the program didn’t tap other well-known choreographers. “We have very good choreographers – Steve Villaruz, Edna Vida, Nonoy Ftoilan. They could have been tapped for the #SeaGamesOpening P***a. Parang nanunuod ka lang ng perya sa probinsiya nito.”

“Why did they not use some of our ballet dancers?????” Robles also asked.

In a comment, Quintos said, “With all due respect to Ms. Raissa, ballet sana ang gustong peg nung una kaming nag meet with the Five Currents team. And that was because they knew of the great work of Lisa Macuja-Elizalde, Stella Abrera, and other ballet dancers who had made good in the international Ballet scene.”

He continued, “I love Ballet and I will be the very first one to watch a good performer. But Dexter Martinez Santos and I firmly believed that the opening image should be more in tune with Contemporary Filipino dance. That the Sarimanok should use the Neo-Filipino style made popular by National Artist Alice Reyes and other like Denisa Reyes. The Sarimanok opening was choregraphed by Dexter Santos and JM Cabling.

When told by the same commenter that she found the “perya sa probinsya” tweet insulting, Quintos answered, “Wala po tayong magagawa. Public art po yan. The moment it goes out there, we have to be ready for any comments. As long as we stick to our vision and execute it in the best way we can, then…bahala na si Batman, wika nga. But thanks to other like you who see and appreciate what we do. Salamat po.”

On Monday, Quintos posted a group picture of the whole team. “It took a world to project the Philippines in a dignified and joyful way. Thank you, Five Currents for the systems, the order, the precision. Above all, for the mutual respect. Thank you, Team Pinas, for being the very best Filipinos we all could be.”

What to expect at the 30th SEA Games opening ceremony