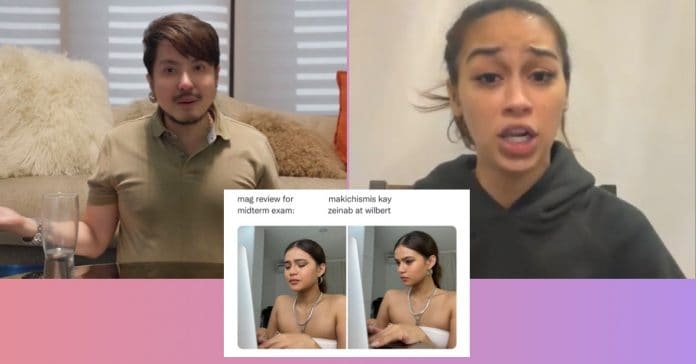 You can count on Pinoys to turn any issue into a meme-worthy one.

On Sunday night, netizens were stormed with details of Wilbert Tolentino and Zeinab Harake’s public confrontation.

The talent manager and vlogger’s “revelation” video on social media came after the YouTube star’s cryptic posts, which alluded that someone has been using influencer talents for their own fame.

In the video, he exposed his conversations with his “mentor” Zeinab who was allegedly slandering her fellow local influencers.

Wilbert claimed Zeinab told him the influencers he had collaborations with were “trash.”

Based on the screenshots he shared, Zeinab supposedly spoke bad about personalities such as Alex Gonzaga, Ivana Alawi, Robi Domingo, Jelai Andres and Toni Fowler.

Prior to his exposé video, Zeinab has been sharing cryptic posts about people she thought were on her side but ended up being against her.

Zeinab has already responded to her former friend’s video, apologizing to the personalities who were mentioned.

After the two’s exchange, netizens couldn’t help but post their reactions to the influencer cat fight.

Check out how these netizens lightened up the issue: