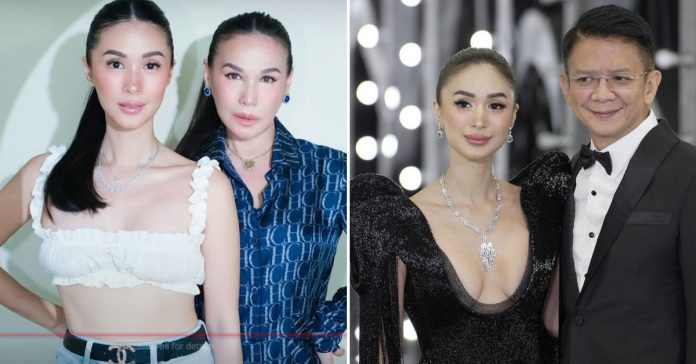 Heart Evangelista’s mom, Cecilia Ongpauco, had reacted to ongoing speculations about the status of her daughter’s marriage to Senator Chiz Escudero.

Heart and Chiz have been making showbiz headlines after sparking rumors that they have gone their separate ways.

Netizens also took notice of how Heart seemingly looked “unhappy” during her and Chiz’s last public appearance together at the GMA Thanksgiving Gala Night last July 30.

Heart then fueled split rumors when she recently admitted in a YouTube vlog that she’s going through “personal struggles like I feel a lot of pressure in my life.”

“I’ve always been such a happy person and I’ve always been somebody who just goes against the tides and just let the waves crash on me. I’m not going to lie — I’ve been going through a lot of personal stuff in my mind,” said Heart.

The fashion icon added, “But you know, at the end of the day, I’m still very grateful and as long as there’s life, there’s hope.”

While Heart and Chiz have yet to personally address rumors about their supposed marital problem, the actress’ mom believes that the two will be able to sort things out.

“It’s their private life so I am just praying for them,” Cecilia was quoted as saying in an interview with ABS-CBN News.

“I know they will be OK! I’ve known Chiz to be a mature and grounded person that’s why I am happy for my daughter,”  she added.

Cecilia, however, maintained that she has no idea about the alleged breakup between her daughter and Chiz’s.

It can be recalled that Heart had a falling out with her parents after they disapproved of her relationship with Chiz.

Heart’s parents ignored her wedding day in 2015, but they eventually reconciled months after.

In Heart’s vlog back in 2021, Cecilia told Chiz what she liked about his marriage to her daughter.

“You know what I like about your marriage? You allow each other to grow. You don’t stunt her growth,” she then said.

“You don’t cramp her style. I think that’s what’s good about their marriage. He allows her to grow, mature on her own.”