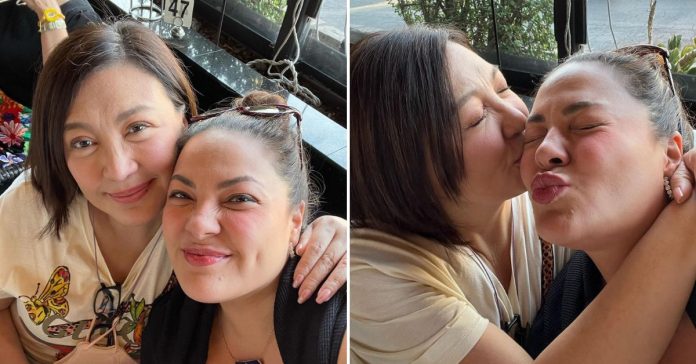 Sharon Cuneta found comfort in her daughter KC Concepcion’s presence while mourning the loss of her showbiz friend Cherie Gil.

The Megastar took to Instagram on Tuesday to share a photo of her getting reunited with KC, her child with ex-husband Gabby Concepcion, in the United States.

“A little HAPPY during days of grieving.🥰❤️🙏🏻@kristinaconcepcion,” wrote Sharon as caption alongside a carousel of selfie pics of them together.

Sharon also shared other snaps of her and KC’s get-together with her friends in a Japanese restaurant.

Sharon is feeling devastated over the death of her former co-star, reminiscing in a previous social media post the day she last saw Cherie at the hospital.

Calling Cherie her “true screen partner”, Sharon expressed how she was heartbroken to lose the actress.

Cherie, or Evangeine Rose Gil Eigenmann, died on August 5, 2022 after a battle with cancer.

In a statement released by her bereaved family, Cherie was diagnosed with a rare form of endometrial cancer in October 2021.

It was the veteran actress’ request that her illness be hidden from the public.

“Despite her struggles she always managed to exude courage and never lost her trademark sass, wit, and infectious humor, or her larger-than-life personality,” read the statement.

“While we are deeply saddened by our loss and still mourning her passing, we are incredibly moved by the outpouring of love and support for her and our family; evidence of just how many lives Cherie touched,” it added.