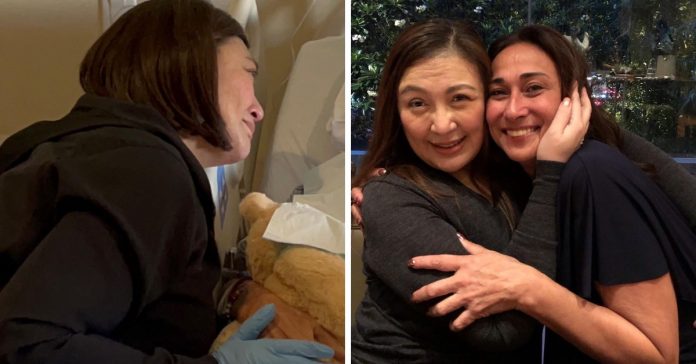 Sharon Cuneta went emotional as she mourned the passing of her dear friend, award-winning actress Cherie Gil, whom she called the “most important part of my life and my history”.

The singer-actress took to social media on Saturday to pen a heartbreaking tribute to Cherie who passed away on Friday, August 5, after a battle with cancer.

Sharon revealed flying to New York on Friday to visit Cherie in the hospital, hoping against hope that a miracle would happen and that Cherie would make it through.

“I am eternally grateful to Him for giving us the few hours we spent together…the love and words yet again exchanged in person.

“The knowledge that the friendship forged when we were very young was stronger would only keep getting so,” she wrote.

Sharon recalled Cherie giving her two thumbs up and exchanging I love you’s with her, but was heartbroken to receive a call informing her of Cherie’s death hours later.

“You told me about your tree to heaven outside of your apartment window which I didn’t get to see. We said ‘I love you’ and I said I’d see you again today…and you raised both arms and gave me the thumbs up with both hands,” wrote Sharon.

“Then barely 11 hours after I left you, I was awakened by his call saying you had passed…I leave New York now with a much heavier heart than ever before…because now I am leaving YOU with the knowledge that I will NEVER see you again…I cannot process it. It seems so unfair.”

Sharon and Cherie might be best known for their bida-kontrabida tandem in the now-classic film Bituing Walang Ningning, but have found a best friend in each other.

Sharon said she’s thankful to “see (Cherie) off” with the latter’s family members but also bared her pain in losing one of her “most loved.”

“My heart is in pieces again & now I dunno how to put it back together anymore-because among the many loved ones I ‘have lost these past few years, you were and always will be one of my most loved…a most important part of my life & my history. Of my heart. I love you so very much.”

“It is the end of an era now that you’ve left us…What will I do without you now, Love? My true screen partner, a true friend, ninang of Simone…I miss you so terribly know it will only get worse.

“Be at peace in God’s loving arms, my Cheech…I’ll see you again someday. I will love you with all my heart, forever. Thank you for everything.”

In a separate Instagram post, Sharon reposted a clip showing the iconic scene from Bituing Walang Ningning, where Cherie’s character Lavinia uttered the phrase, “You’re nothing but a second-rate, trying hard copycat!” to Sharon’s character Dorina and threw water on her face.

Sharon and Cherie recreated the scene during a reunion in 2019, but had their roles switched.

“The industry has lost one of the very best actors it has ever produced. I have lost a part of myself no one can ever replace,” said Sharon in the caption.