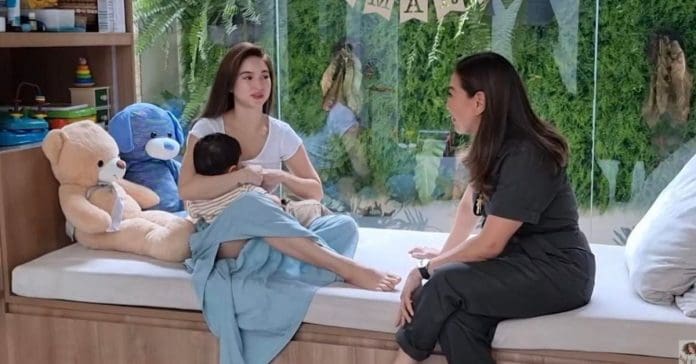 Celebrity mom Coleen Garcia opened up on her experiences as a breastfeeding mom and her sentiments on normalizing breastfeeding.

In a vlog by renowned broadcast journalist Karen Davila titled “The new life of Billy and Coleen!”, the actress talked about how breastfeeding changed her life.

“Breastfeeding is the most selfless thing I’ve ever had to do,” she said.

When Karen asked how long does Coleen intend to breastfeed, she answered that her goal is three years.

“It’s almost two years na, so I just have to push for another year,” she said.

Karen also gave her thoughts about breastfeeding wherein she said that during the older generation, it’s very conservative since you don’t see women breastfeeding their children out in the open even during the time when she first became a mom.

“Even now when I first became a mom, parang people wouldn’t really show they were breastfeeding – it wasn’t out in the open,” the broadcast journalist said.

Karen went on by praising Coleen saying that the actress is proud of breastfeeding her son in public, even sharing a snap of her on Instagram.

“Talagang pinapakita ni Coleen she’s breastfeeding,” Karen said to which Coleen replied, “I really want to normalize it,” pertaining to breastfeeding in public.

The actress also shared how she could not go anywhere since her son, Amari, is very dependent on her for milk.

“There are days na parang gusto ko na lang sumigaw in frustration,” she said. “And it’s very draining kasi when I gave birth, when I first started breastfeeding parang sobra ‘kong nade-drain. My lips were so dry and then I felt like the life was being sucked out of me.”

Coleen also said she had to sacrifice a bit of her career for Amari since she’s breastfeeding. “We don’t pump and we never use bottles with Amari. So I can’t leave him, I’m literally his source of food and source of milk.”

“I don’t think it’s just because of becoming a mom and a breastfeeding mom, but because of the pandemic, yung parang you just choose to be safe na lang,” she said when Karen asked her what she had to sacrifice when she decided to be a full-time committed hands-on mom.

Coleen gave birth to baby Amari on September 10, 2020 via water birth at home.

Netizens gush over Coleen Garcia’s gorgeous snaps with her son...

Billy Crawford thanks wife Coleen Garcia for making his dream...