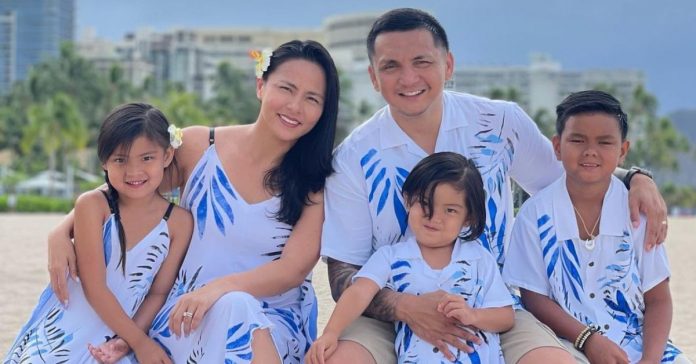 It looks like a new addition is coming to the Alapag family!

LJ Moreno and her husband, former PBA star and now Stockton Kings assistant coach Jimmy Alapag have confirmed that they are expecting their fourth child, about seven months since they had a second miscarriage.

The former actress made the announcement on Sunday, July 10, in a family vlog posted on their Youtube channel, where they shared with their children the big news, showing them a photo of her sonogram and pregnancy test.

“There will be a brother or sister coming, we don’t know yet,” Jimmy told their kids, who had since expressed their delight and excitement upon hearing the news.

LJ also shared a sneak peak of her prenatal check-up and explained how she had been feeling unwell for the past two months, with the kids even speculating that she possibly contracted Covid-19 which prompted her to take a pregnancy test.

She then disclosed the reason why she chose to make the announcement at that time.

“The reason why we kept it ‘til at least I’m now almost 13 weeks, hinintay muna namin na matapos yung [first] trimester, because I actually had two miscarriages,” the former actress said.

“We did not announce it on the vlog. I actually had another miscarriage, after the one nung before kami lumipat here in the States. I had another one just last year December,” she continued.

LJ added that among the reasons why she and Jimmy kept the announcement of her second miscarriage from the public was because their kids, especially their eldest child, Ian, was immensely affected and did not take the news of her first miscarriage well. The former actress also said that they wanted to be sure of her pregnancy before announcing it.

She then asked followers to help her pray for a smooth pregnancy, as she was already 41 and would be giving birth at 42 years old, which, she explained, was highly risky as it was considered as geriatric pregnancy.

“Please keep me in your prayers. Me and Jimmy and the kids,” the former actress continued, adding that she has been “feeling really sick” but also said that she is slowly regaining her energy.

At present, the family is based in the United States, after leaving the Philippines for good back in September 2020, the same month when the two also revealed their first miscarriage.