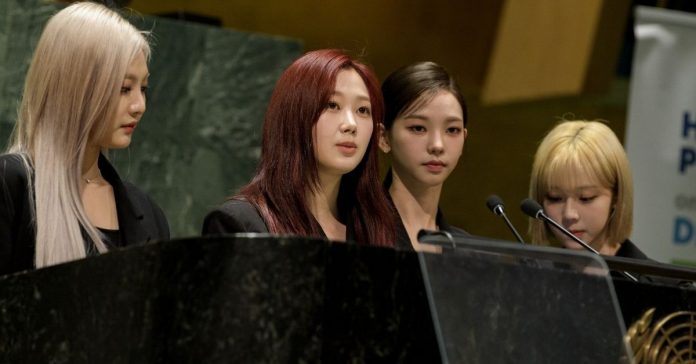 The High-Level Political Forum opened its annual meeting at the UN General Assembly Hall in New York on July 5. To start, Aespa’s Karina, Giselle, Winter, and Ningning attended the first day of the meeting and gave a striking speech about the significance of sustainable development.

The girl group delivered the speech titled, “Next Generation to the Next Level,” and a video performance of their hit song “Next Level’ was played at the assembly.

Giselle spoke as a representative of the group and made the following statement in relation to their unique metaverse concept and the theme of this year’s forum, “Hello, my name is Giselle, and we are so honored to be here today. Our group, Aespa, uniquely moves between reality and virtual reality. We exist here in the real world, and four of our avatar members exist in the virtual world. Together, we are often called the ‘metaverse girl group.’”

“People are paying more attention to creating the best possible metaverse world. It transcends many boundaries—reality and virtual reality, time and space, and genres and generations. As the metaverse accelerates, we have to ask the question: ‘Are we working just as hard to create the best possible real world?’” Giselle added.

She also went on by saying that the metaverse reflects reality and that if our own reality is not sustainable, it would become difficult to sustain the possibilities of the virtual world.

“Without sustainable ecosystems or equal opportunities for quality living, there will be no real world to be mirrored,” Giselle continued.

“Aespa will continue to connect with the next generation through music, and we’ll work to represent sustainable goals in reality, hence, within the metaverse,” she said.

Finally, Karina concluded the speech by saying, “Once again, thank you again for having us. We are honored to be here to discuss a topic that is so important for the next generation. And we will now be performing our song ‘Next Level.’ We hope you enjoy it. Thank you.”

After the forum, the members of Aespa met and took pictures with diplomats, which the United Nations also shared in a number of photos.