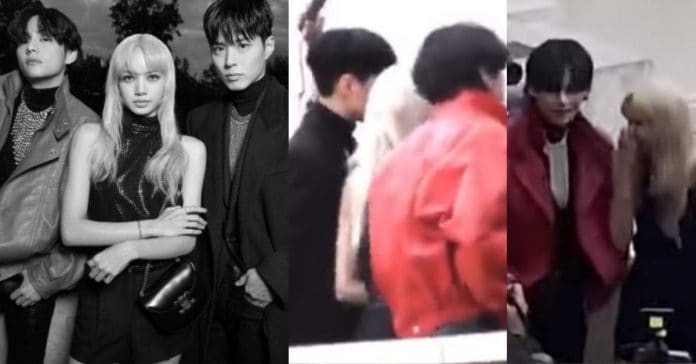 Fans were overjoyed when they saw BTS’ V, BLACKPINK’s Lisa and K-drama star Park Bo Gum having wholesome interactions at the Celine Fashion Show in Paris.

Park Bo Gum won the hearts of netizens when he was seen collecting fan letters for Lisa and V.

Another adorable interaction is when the event played Lisa’s song LALISA. It can be seen that V was smiling on the side and bopping his head while vibing.

Lisa and Park Bo Gum attracted attention for their endearing interactions as the singer made sure that the actor wasn’t overlooked or left out of the main event.

Based on this video on Twitter, Lisa seemed to be pulling Bo Gum closer to them during their photo-op.

Adding another lovely interaction is when Lisa might have addressed V as “oppa” which meant that the two are talking in a less formal way.

Refer to this video by a netizen from Twitter:

Netizens also speculated that Bo Gum might have given his suit jacket to Lisa at the after-party because of the cold weather in Paris and that Lisa returned his suit before leaving.

Fans laughed and wondered what V and Lisa were talking about when a photo of them online looked like they were “gossiping.”

Lisa, V and Bo Gum seemed like they enjoyed each other’s company during their time in Paris and the event showed fans the iconic interactions between their favorites.