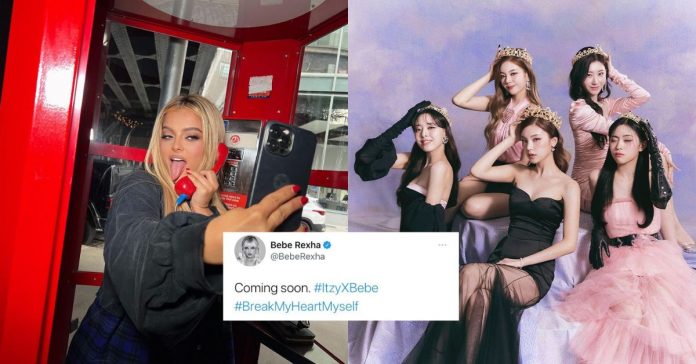 Heads up MIDZYs, an ITZY x Bebe collab is on the way!

Bebe Rexha has released a snippet teasing her upcoming collaboration with K-pop girl group ITZY for a new remix of her song Break My Heart My Myself on Tuesday, June 28 (Manila time).

The singer-songwriter took to Twitter to post a short audio clip of the song remix, writing “Coming soon. #ItzyXBebe #BreakMyHeartMyself” for the caption.

As of writing, however, an announcement of the official release date is yet to be made.

Bebe has previously been hinting at a potential collaboration with ITZY following members Yeji and Ryujin’s dance cover in Studio Choom’s MIX & MAX series of her original track with Travis Barker.

Their collaboration has since been confirmed as Bebe tweeted on having “exciting news” about Break My Heart Myself, which ITZY also replied to.

Since her song’s exposure from Yeji and Ryujin’s performance, the singer-songwriter has been expressing her gratitude towards listeners and K-pop fans for their support.

Eventually, Bebe also tried her hand at dancing to the ITZY members’ choreography of her song.

Apart from their upcoming collaboration with Bebe Rexha, ITZY is also set to release their fifth mini-album Checkmate on July 15.