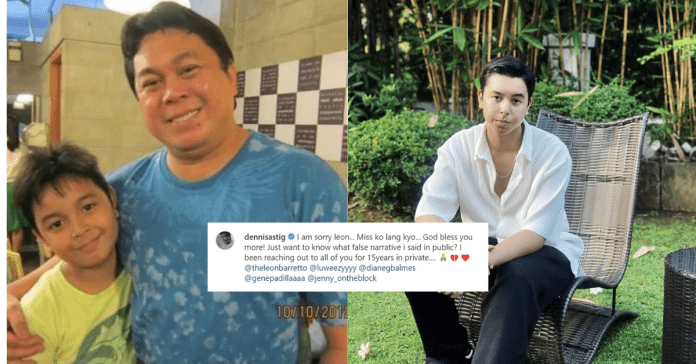 Dennis Padilla has replied to the open letter penned by Leon Barretto, his son with former wife and actress Marjorie Barretto.

“I am sorry Leon… Miss ko lang kyo… God bless you more! Just want to know what false narrative I said in public? I been reaching out to all of you for 15years in private…. 🙏💔❤️ @theleonbarretto,” Padilla wrote in an Instagram post on Monday morning, June 27.

Hours later, Padilla also shared a handwritten letter for his children with Marjorie, saying that being their father was the “greatest honor” that he has received and that he has “regretfully made mistakes” in his life as a parent.

“I may not have been there for you but I always had you in my heart,” he wrote.

He also said that if he could have one wish, he would love to spend some time with his children.

Padilla’s post came after his son also took to Instagram and wrote a lengthy message in response to the veteran comedian’s earlier but now-deleted post where he expressed his disappointment at not getting a Father’s Day greeting from his children Julia, Claudia and Leon.

In the said open letter, Leon aired his sentiments over Padilla and his “false narratives” that caused his sisters distress, saying he wanted peace and apologizing for them not writing him a Father’s Day message.

Since Padilla’s split with Marjorie back in 2007, all three of their children have been staying with their mother.