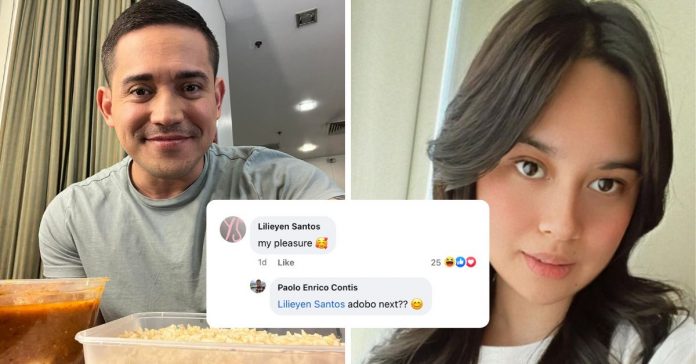 Looks like Paolo Contis’ tummy and heart were full after rumored girlfriend Yen Santos sent him over food.

On his personal Facebook account, the actor shared a selfie of him with the hearty meal she received from the actress.

Yen, meanwhile, responded in the comments section: “My pleasure,” along with a smiling face with hearts emoji.

Paolo replied back, jokingly telling Yen to send him an adobo meal next time.

The two have long been rumored to be a couple after being spotted several times together following the controversial breakup of Paolo with ex-partner LJ Reyes last year.

LJ now resides in the United States with her and Paolo’s daughter Summer and Aki, her son with ex-boyfriend Paolo Avelino.

Paolo and Yen were previously spotted holding hands while walking together at a mall, enjoying a romantic dinner, and vacationing in Boracay, but have not confirmed or denied the romance speculations.