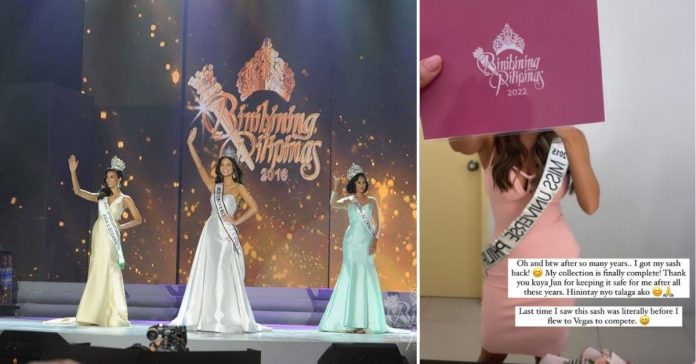 Pia Wurtzbach sent her fans on a quick trip down memory lane as she shared a snap with this memento from her Binibining Pilipinas days.

The pageant queen shared a snap of her sporting the sash she earned when she won as Miss Universe Philippines during the Binibining Pilipinas pageant back in 2015.

“Oh and btw after so many years.. I got my sash back! My collection is finally complete! Thank you kuya Jun for keeping it safe for me after all these years. Hinintay nyo talaga ako.

“Last time I saw this sash was literally before I flew to Vegas to compete, “she wrote in the caption.

The 32-year-old also shared that she met the candidates for this year’s Binibining Pilipinas pageant.

It was in 2015 when Pia was hailed as the local pageant’s winner, who will compete for the Miss Universe 2015 pageant.

Herlene Budol says Bb. Pilipinas is her last stint in...

Pia Wurtzbach reveals she’s training for her first-ever marathon in...