Luis Manzano, Arthur Nery react to post that joked about them as BL stars 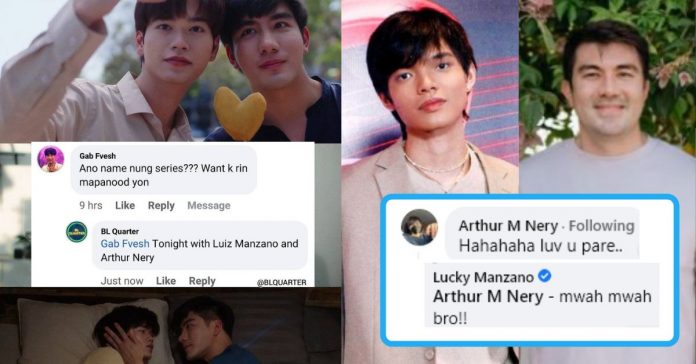 Luis Manzano and Artur Nery earned laughs after reacting to a social media post that jokingly suggested that the TV host and fast-rising balladeer are starring in a Boys’ Love (BL) series.

BL Quarter, a Facebook page dedicated to everything BL, posted a comment of a netizen who queried about the title of a certain Thai BL series.

An admin of the FB page, meanwhile, answered in jest: “Tonight with Luis Manzano and Arthur Nery,” implying that the Thai stars are lookalikes of Luis and Arthur.

The exchange has since garnered more than 240,000 reactions and 21,000 shares on Facebook, as of writing.

The Pagsamo and Higa hitmaker, on the other hand, commented under Luis’ post with “Hahahaha luv u pare.”

The Thai BL series in question is titled Sky In Your Heart which stars Jiruntanin Trairattanayon and Jirakit Thawornwong, who’s long been dubbed as Luis’ “twin brother.”

Even Jirakit had something to say about the Luis and Arthur “pairing.”

ICYDK, the two are following each other on the image-sharing platform.