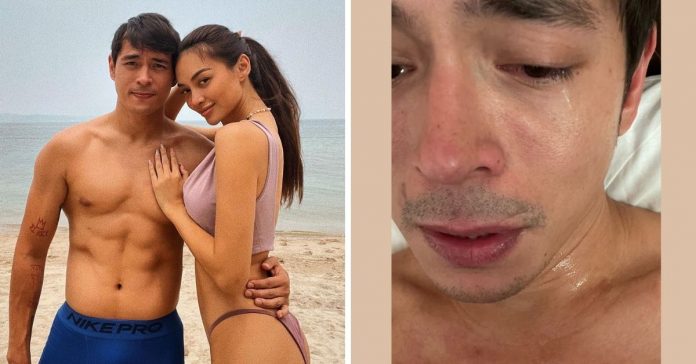 Jake Cuenca has broken his silence on rumors that he and girlfriend Kylie Verzosa already broke up.

The Kapamilya actor in an emotional Instagram post on Saturday confirmed that he and Kylie are no longer together after three years of being a couple.

“This was us. 🐶 👦🏻 👧🏻 🐩,” Jake began his Instagram post which featured photos of a figurine of her and Kylie with their two pet dogs, and them holding hands.

“I’ll hold on to all our precious memories together with so much value. This past 3 years of my life have certainly been the best. I say this with such a heavy heart but me and Kylie have decided to go our separate ways,” announced Jake.

He continued, “I’m still so proud of us because we didn’t want to break up in anger. We both wanted to be able to look back on our relationship with no bitterness, no anger and no regrets, only the good memories. Certainly that’s what I will be holding on to.”

The 34-year-old went to say that he will continue to support Kylie “because in so many ways I feel a part of your journey and I will always pray for your success”.

Jake said he’s glad to remain friends with Kylie even after their breakup, and sent the beauty queen his well-wishes.

“I’m happy we were able to finish this chapter of our lives the same way we started it. As friends. Wherever you are or whatever you’re doing I will always be sending you love and positivity. know that you will always have a person in me who will always be proud of you. I’ll see you around Kylie,” Jake concluded his post with a heart emoji.

Minutes after speaking up on their split, a heartbroken Jake shared on his Instagram stories a screenshot of the song Let It Go, followed by a selfie photo of him in tears.

Kylie first sparked breakup rumors with Jake after she posted the word “broken” in a recent tweet. The beauty queen-turned actress fueled the speculations after becoming emotional in an episode It’s Showtime when the hosts discussed about breakups.

Jake, on the other hand, has been sharing cryptic tweets via his Instagram stories.