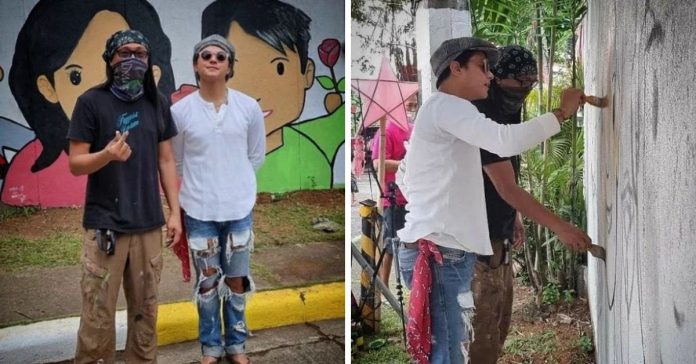 Daniel Padilla once again showed his support for Leni Robredo’s presidential candidacy in the upcoming May 2022 elections.

Over the weekend, the Kapamilya actor was spotted participating in a mural painting session for Robredo and her running mate Senator Kiko Pangilinan.

Daniel joined muralist AG Saño and some other volunteers in painting the “Leni-Kiko-Tatang Neg” in a subdivision in Fairview, Quezon City.

In his Instagram post, AG addressed fans who were looking for Daniel’s girlfriend Kathryn Bernardo, saying she was just out on a grocery run so she couldn’t join the activity.

Daniel, meanwhile, shared on his Instagram page another mural by AG with the word “kapayapaan” written across.

The 26-year-old, whose mom Karla Estrada supports the UniTeam tandem of Bongbong Marcos and Sara Duterte for president and vice president, earlier showed support for Robredo’s candidacy in March when film director Mandy Reyes shared photos of him with the actor posing beside a campaign poster of the presidential bet.