LOOK: Celebrities who hit the 2022 campaign trail for their presidential, VP bets 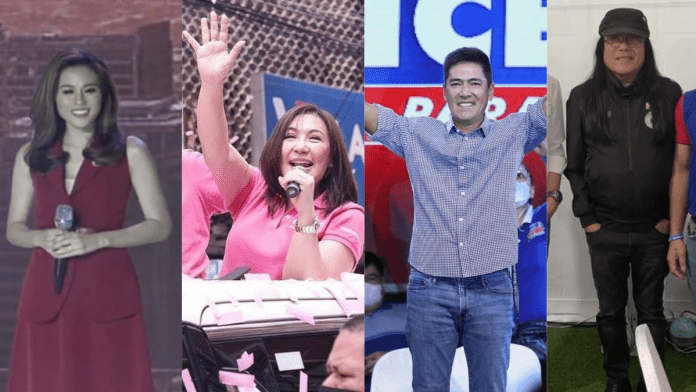 This May 9, we uphold our right to vote as we choose the next leaders of our country through the 2022 national elections.

We all have our choices, but we are surrounded by different mediums that might influence our bets, especially for the position of president and vice president.

One of these mediums is the influence of our favorite local celebrities, with some recently gracing campaign rallies to persuade people to vote for the people who they believe are the rightful people to become the next leaders of the nation.

Check out your favorite celebrities who appeared to support their presidential and vice-presidential bets ahead of the upcoming May elections.

Last February 10, Marcos took to Instagram to thank Gonzaga for providing her hosting duties during his rally.

Gonzaga had faced mixed reactions from netizens after showing her support for Marcos. However, this was not the first time as her controversial YouTube vlog with Marcos, posted last September 2021, also faced criticism, wherein she asked him about the “greatest lessons” he has learned from his father, the late dictator and former president Ferdinand Marcos, Sr.

Karla Estrada also appeared in the proclamation rally for the Marcos-Duterte tandem. Representing her “Tingog” partylist, she performed for the Philippine Arena crowd.

From her hometown in Naga City, Camarines Sur, Vice President Leni Robredo kicked off her presidential campaign alongside vice presidential candidate Senator Kiko Pangilinan and her senatorial bets with a proclamation rally.

The event was filled with Robredo’s supporters, including celebrities like Cherry Pie Picache. The veteran actress made an emotional speech among the crowd.

In the post, the actress, who was also present in the Robredo-Pangilinan proclamation rally, said she joined the group “KYUSI 4 LENI” and read two poems onstage from the publication 100 Pink Poems Para Kay Leni.

“The past 3 days have been nothing but amazing after seeing the outpour of love from everyone for the arts and our country,” she said.

The actress-model, who is the wife of Lacson’s son Pampi, posted a video of herself at the event on Instagram last February 8.

Aguilar, who once ran for Senator in the 2019 elections, posted about his experience on Facebook last February 8.

On Tuesday, February 22, Sharon Cuneta joined her husband, vice presidential bet Kiko Pangilinan, in a Tarlac campaign for himself and Vice President Leni Robredo. This marked the first time the Megastar joined the senator in any of his public events after the campaign period for national election candidates kicked off earlier in the month.

Cuneta and Pangilinan, who have been married for 25 years, were welcomed by the Tarlac crowd as they waved and smiled at the Gerona Public Market.

On Instagram, the singer-actress thanked Tarlac and posted a photo of herself and Kiko happily waving to their supporters.

“Dacal a salamat Tarlac!” she wrote.

Adam Laurena
Adam Laurena loves to travel around different realms of creative writing, drag, classic sitcoms and video games. He dreams of combining his love for writing and drag, someday, by publishing a novel about the local drag scene.