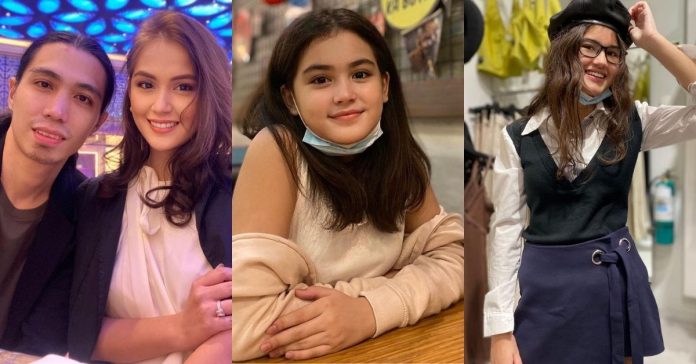 Lian Paz and her non-showbiz fiancé John Cabahug are taking things “one step at a time” and that includes the latter’s plans of legally adopting the former EB Babe member’s daughters with estranged husband Paolo Contis.

In a recent interview with The Philippine STAR newspaper, John, talked about his adoption plans, sharing that he already consulted with legal counselors for the matter.

The basketball player-turned-entrepreneur has also long considered Lian’s daughter Xalene, 11, and Xonia, 10 as his own kids.

After more than eight years of being together, Lian and John now have a blended family of six. They welcomed their first child Niña Angela in 2016. John also has a daughter from a previous relationship named Lexy.

The couple, who were elementary and high school classmates, got reconnected after John tapped Lian as an endorser for a family business.

In February last year, John asked Lian’s hand for marriage at a luxury resort in Cebu.

Lian admitted that she was initially hesitant to accept John’s proposal considering her ongoing annulment case with actor Paolo Contis.

John, nevertheless, reassured her: “It’s not about that. I just want you to know that I’m doing this because this is the right thing to do.”

John said he would have done the proposal sooner if the annulment issue wasn’t in the way.

“Nagpaalam ako sa mga bata and sabi ko, this is the right thing to do. We cannot live by the mistakes of the past. But one step at a time. You know, the Lord will give it at the right time and we all deserve it. Because we’ve made some efforts. ‘Yan lang talaga, yung papers, but for me, we’re already married.”