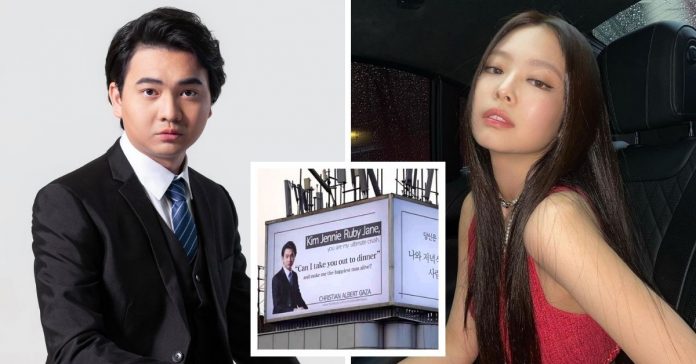 Christian Albert Gaza or Xian Gaza is sparing no expense to ask his “ultimate crush,” Blackpink’s Jennie out for a dinner date. The controversial internet personality shared that he had a billboard set up in Seoul, South Korea just to catch the South Korean idol’s attention.

On social media, he shared that he had the massive billboard set up just a few kilometers away from the headquarters of YG Entertainment, the girl group’s management.

“I don’t know how to contact her kaya pina-billoboard ko na lang sa puso ng South Korea, a few kilometers away from BLACKPINK’s YG headquarters. I hope she will say yes,” he wrote.

Xian’s billboard read: “Kim Jennie Ruby Jane, you are my ultimate crush. Can I take you out to dinner and make me the happiest man alive?”

In another Facebook post, Xian revealed that he had spent 1.5 million pesos just to set up the billboard in Seoul.

He pulled similar stunts in the past to ask his “crushes” out, including Erich Gonzalez.