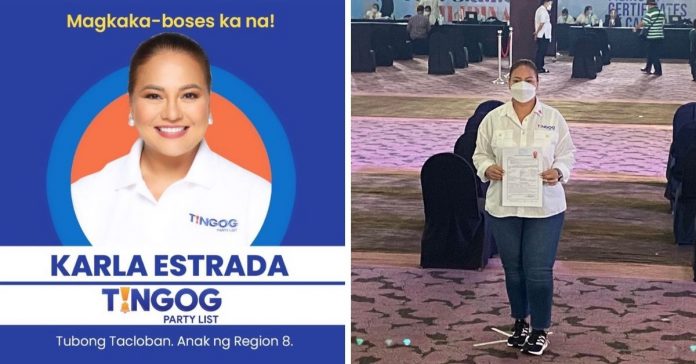 ABS-CBN has released a statement on Karla Estrada’s intention to run as representative of Tingog Sirangan partylist which voted against the media giant’s franchise renewal.

The Kapamilya network on Saturday said it respects the actress’ decision to seek an elective post in the May 2022 elections.

“In her desire to continue serving her kababayans, Karla Estrada has decided to run for public office.

“We respect her decision and wish our Kapamilya well as she pursues her mission of service,” read ABS-CBN’s statement.

Using the #WithdrawKarlaEstrada, Kapamilya fans, particularly Kathniel, fandom of Kathryn Bernardo and Karla’s son Daniel Padilla earlier took to social media to express their disappointment against Karla’s decision to run under the partylist.

To recall, incumbent Tingog representative Yedda Romualdez, is one of the 70 lawmakers who voted against the renewal of the ABS-CBN franchise in July 2020.

Kathryn and Daniel were among the Kapamilya stars who spoke up for the 11,000 employees who lost their jobs following the shutdown of ABS-CBN’s broadcast operations last year.

Karla, who said joining  politics wasn’t an easy decision, has yet to address the issue.