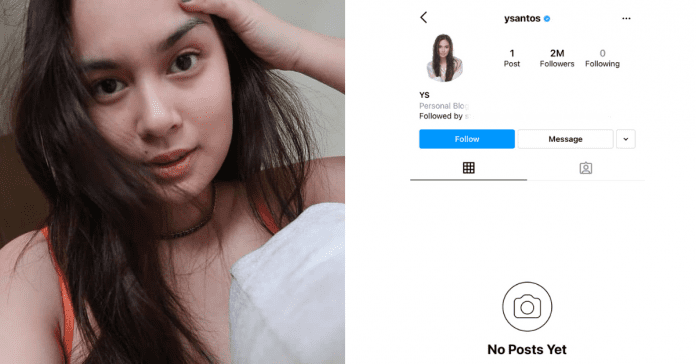 Yen shocked fans after her Instagram account with the handle @ysantos which has million followers showed no existing photos as of Thursday, September 23.

It isn’t clear whether the actress has archived or permanently deleted her photos from the account.

Yen was recently involved in Paolo Contis’ controversial split with ex-girlfriend LJ Reyes, as netizens speculated that she was the third party in the breakup.

Speculations about the breakup rose mid-August after Paolo unfollowed LJ Reyes and deleted photos of them together from Instagram.

Amid the controversy, Paolo and Yen were spotted spending time together at Baguio and Pangasinan late August.

Paolo, however, publicly defended Yen in an Instagram post stressing that she was not the cause of their breakup.

The two were co-stars in the Netflix film A Faraway Land.

Yen, on the other hand, kept her silence since the issue surfaced. She has had not updated her Instagram account until she wiped out her feed on Thursday.