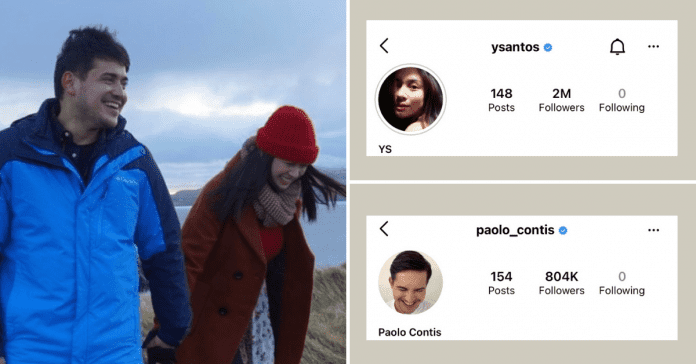 Similar to Paolo Contis, Yen Santos has also unfollowed everyone on Instagram. The two are co-stars in the new Netflix film A Far Away Land.

On Thursday, Paolo created a buzz after netizens discovered that he’s no longer following anyone on the photo-sharing app, including longtime girlfriend LJ Reyes.

Photos of them together, as well as those with LJ’s son with Paulo Avelino, have also been removed from Paolo’s account, sparking breakup rumors.

LJ, however, still follows Paolo, and has been mum on the issue.

Amid the speculations, netizens also noticed that Yen’s following count went to zero.

Both Paolo and Yen’s recent Instagram update were promotional photos for their film A Far Away Land, which started streaming on Thursday, August 19.

A Faraway Land tells the “complicated love story” of a married woman who meets a reporter working on a documentary about Overseas Filipino Workers in Faroe Islands.

Some netizens, meanwhile, couldn’t help but think that the whole unfollowing thing is just all part of a promotional stunt for the film.