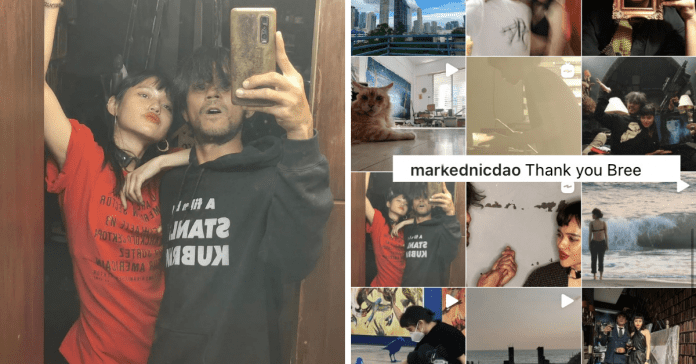 Celebrity photographer Mark Nicdao is in deep sorrow following the passing of artist Bree Jonson, who was found unconscious at a hostel room in San Juan, La Union and pronounced dead on arrival at a hospital.

On Instagram, Mark, who appeared to be a close friend of the Davaoeña artist, has been posting photos and video clips of Bree, whom he referred to as his “master,” after news of her death broke on Sunday.

In his posts, Bree was seen painting and doing her artwork. He also shared other memories of time spent together.

In between his tribute posts, Mark had to express his apologies to his followers for flooding his feed with memories of Bree.

In one of his post, Mark thanked Bree for giving him the “confidence that I needed”.

Check out some of his posts below:

Leon Gallery earlier mourned the death of Bree, saying her passing is “undoubtedly a major loss to Philippine Art”.

“Bree Jonson is primarily known for her unique visual language that explores the relationship between mankind and the environment. Her works act as a visual and critical commentary on the contemporary human experience in contrast with the idea of human nature itself,” stated Leon Gallery in a Facebook post on Monday.

Philstar.com reported that PNP is waiting for the autopsy to determine the cause of Bree’s death.

According to One News, she was last seen with Julian Ongpin, son of former trade secretary and billionaire businessman Roberto Ongpin, who was subsequently arrested for illegal drug possession after investigators found cocaine in his room.

The artist, whose works were known to “critique the relationship humans have with the environment,” finished Industrial Engineering at Ateneo de Davao University in 2012 before relocating to Manila for her art. She was only 30 years old.