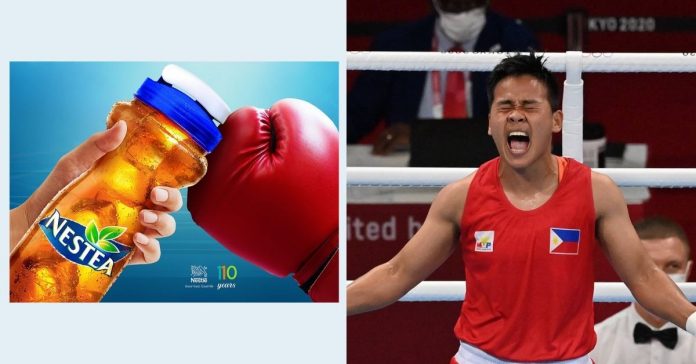 Finally, the moment the Internet has been waiting for!

Nestle’s beverage brand Nestea has officially sent its message of support to “katukayo” Nesthy Petecio as she advances to the gold medal match of the women’s boxing featherweight division in the Tokyo Olympics.

Nesthy outdid Irma Testa of Italy via split decision in the women’s boxing featherweight semi-finals on Saturday, securing at least a silver medal for the Philippines.

To celebrate Nesthy’s feat, Nestea on its Facebook page posted an art card which creatively put together glasses of iced tea in the form of the Olympic rings with the text, “Nestea is with you, Nesthy! Go for Gold!”

“We and the rest of the Filipinos are cheering you on! You got this! 💪”.

Memes of the similar sounding names have been going around online, with netizens “clamoring” for the ice tea brand to make Nesthy their ambassador or reward her with a lifetime supply of its products.

The Pinay boxer is set to face Sena Irie of Japan in the finals on August 3.

Manny Pacquiao to be honored with wax figure at Madame...