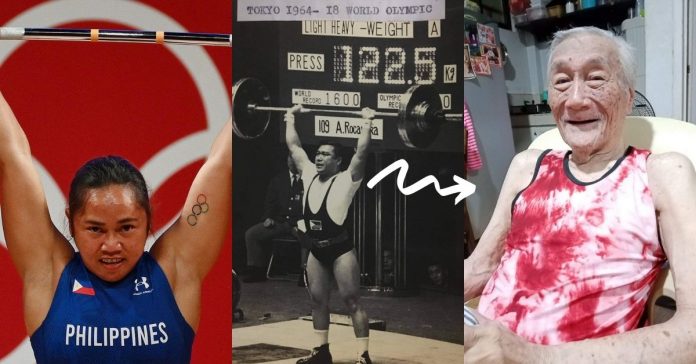 Aside from Hidilyn Diaz, the Philippines has another “living weightlifting legend”. His name is Artemio E. Rocamora, who watched the Pinay gold medalist’s historic win at the Tokyo Olympics — 57 years after he competed in the Tokyo Olympics 1964.

A Facebook post of Shana Rocamora Ramirez gained traction online after she introduced and took pride in her 87-year-old “Papa” or “Lolo” Artemio, a Philippine Air Force veteran and a former athlete who also brought honor to the country in the weightlifting field.

Shana went on to tell that her lolo also had his fair share of struggles, similar to what Hidilyn went through. He relived the days when he lacked financial support, making it also difficult to support his family as an athlete.

“He is now too old and as he saw Hidilyn Diaz compete and bring home the gold, he was so amazed and remembered his journey. Naka-relate siya kasi totoo mahirap humanap ng sponsors, nahirapan daw sya mag-focus noon kasi at the same time kailangan nyang kumayod para itaguyod ang pamilya.”

In light of the nation’s celebration of Hidilyn’s Olympic triumph, Shana said her family hopes her lolo is recognized and remembered for the honor he brought to the country.

“I’m so grateful to be Filipino and proud to be his Apo. Our Super Handsome LOLO Artermio,” said Shana.