5 things why Kingdom: Ashin of the North is worth the wait 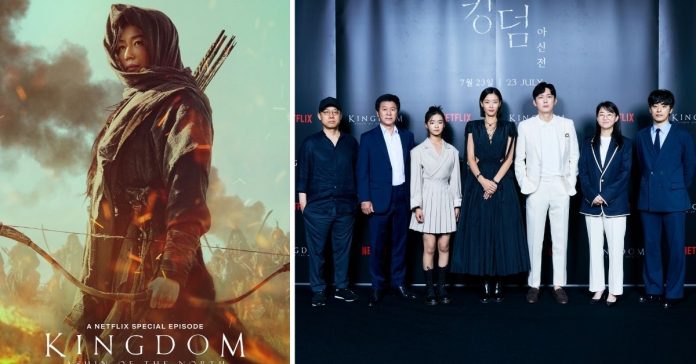 The wait is almost over!

Kingdom: Ashin of the North is coming to Netflix this Friday, July 23. The highly anticipated special episode of the popular Kingdom series promises their fans so much more than just the revelation of the resurrection plant.

Here are five reasons from the creators and cast themselves why this special episode is definitely one to watch out for:

The Kingdom Universe, the brainchild of writer Kim Eun-hee is rich and complex. The show’s fans all over the world can definitely attest to its unique backstory.

Director Kim Seong-hun shared some of the things he found most captivating about the series and pointed out how “infection happens through hunger” in the first season and the lengths that one will go to when greed comes to play in the second season.

He further promised important points to look out for in the special episode which puts the spotlight on the very beginning of the Kingdom story.

The renowned scriptwriter for the Kingdom series, Kim Eun-hee, is also responsible for the drama Signal and the film Once in a Summer among other hits. Likewise, the episode’s director Kim Seong-hun has also worked on movies such as A Hard Day and The Tunnel.

Since working on the two seasons of the Kingdom series and its special episode, Seong-hun said him and Eun-hee have built a great partnership.

He has even went so far as to say that the special episode is Eun-hee’s “best writing yet”.

Even Gianna Jun admitted that the prized writer is one of the reasons why she joined the cast.

Gianna Jun definitely turned heads with her appearance at the end of the second season. The top actress starred in well-loved series like The Legend of the Blue Sea and My Love From the Star.

This time around, she will be portraying a much darker character through Ashin.

Kim Eun-hee gushed: “She’s considered a queen of romantic comedies, but I also liked the deep anguish she’s portrayed in her movies Assassination and The Berlin File.”

Even Gianna herself is a fan of the Kingdom series. She once shared how eager she was to play any role in the series, even if it was a zombie. Luckily, her character Ashin is the key character behind all of the events in the show.

Gianna isn’t the only gem in the episode’s roster of actors. The cast is full of talented artists like Park Byung-eun, Kim Si-a, Kim Roi-ha and Koo Kyo-hwan.

Veteran actor Roi-ha who played Ashin’s father commented, “Since the creators and cast are so great, I didn’t feel any pressure.”

Kingdom: Ashin of the North takes place just before the spread of the zombie plague in the first two seasons.

“This story takes place in the northern frontier near the Amnok River,” Kim Seong-hun divulged.

While Kim Eun-hee explained that the setting was conceptualized from her curiosity about abandoned outposts in the north and thought about how the resurrection plant could have grown in that place.

The setting also reflects the tensions between different groups in the northern region. With this, it definitely adds to the elaborate story and proves it’s not like any other zombie story.

Can’t wait for Kingdom: Ashin of the North? Watch out for its Netflix exclusive premiere on July 23.