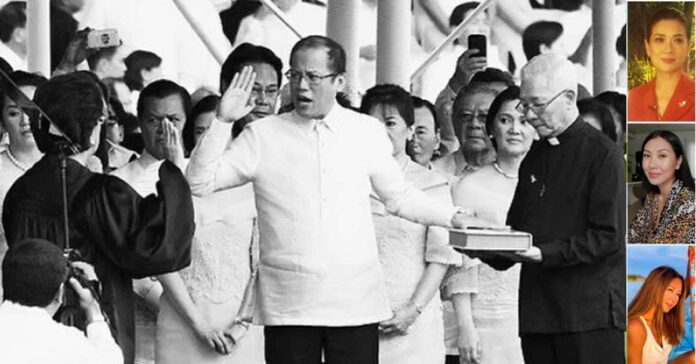 Women who were romantically linked to Benigno “Noynoy” Aquino III paid tribute to the former president who died on Thursday.

Noynoy or PNoy, who remained a bachelor until his death, “peacefully died in his sleep” early Thursday morning due to renal disease secondary to diabetes. He was 61 years old.

In an Instagram post, celebrity stylist Liz Uy posted a black and white photo of Noynoy’s oath of office at the Quirino Grandstand in 2010, as she thanked him for his leadership and love for the Pinoys.

“Years ago, I was given the chance to style the man that would be President. To this day, I remain honored and humbled by the privilege,” wrote Liz.

She continued, “Maraming salamat, Mr. President. For your selfless leadership and love for the Filipino people. We are forever grateful. ?”

Noynoy admitted dating Liz in 2010, but they didn’t end up becoming a couple.

“Gone too soon. Many presidents have come and gone. But PNOY I knew. Thank you for your friendship. Most of all, gratitude for service to our country. Godspeed. Bon voyage. Be happy in eternity with your parents, your fellow Filipino heroes,” said Korina.

An article by SPOT.ph stated that PNoy and Korina became a thing “sometime in the late 1980s to the early 1990s”.

Broadcast journalist Bernadette Sembrano paid her final respects to PNoy during the wake for the former president at the Church of Gesu in Ateneo de Manila University on Friday.

In a previous Instagram post, Bernadette asked prayers for the Aquino family, and expressed her thanks to PNoy for being “true and for loving the Filipino people”.

“Grateful that God gave you the opportunity to serve our people too. I’m sure Your Mom and Dad are proud of you in heaven. Be at peace. Stop worrying now,” said Bernadette.

Bernadette and PNoy were reportedly in a relationship for two years when he was still a Tarlac congressman.

Actress Barbara Milano, meanwhile posted a photo of PNoy on her Facebook account, recalling how she admired the late president for his simplicity and for always keeping a low-profile.

Korean TV and radio host Grace Lee, on the other hand, simply posted on her Instagram account the series of tweets by Foreign Affairs Secretary Teodoro Locsin Jr. who showered PNoy with praises as he grieved over his death.

Grace and PNoy dated for around four months in 2012, according to a Korea Times article.