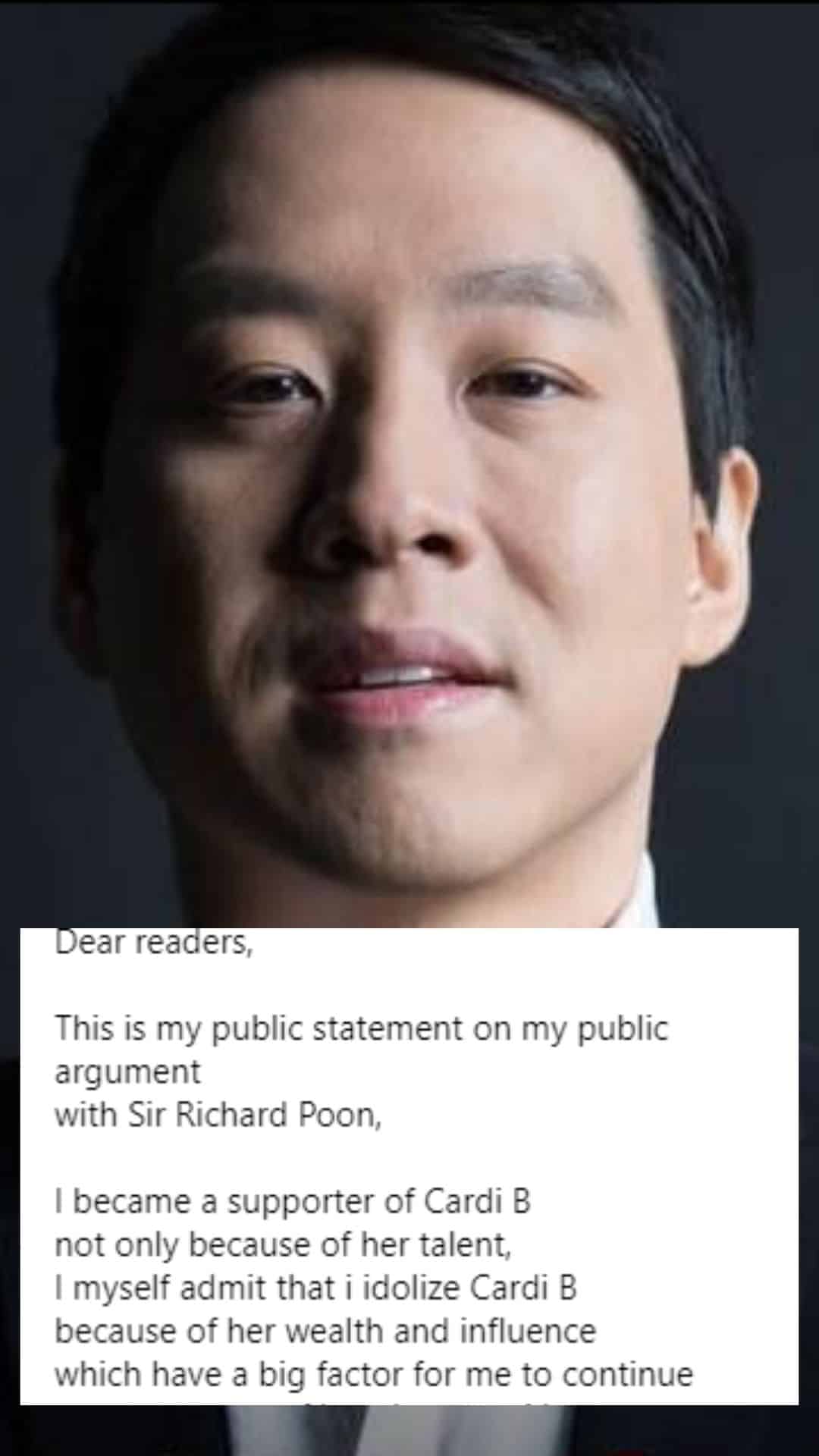 Richard Poon has received a public apology from a Grade 9 student who wished the singer death after his comment on Cardi B’s controversial performance of WAP with Megan Thee Stallion at the recent Grammys.

To recall, the balladeer slammed the performance a week ago, calling it a “hypersexualized lyrics with strippers production” number.

Richard’s post made rounds online and received mixed reactions from netizens. Some shared the crooner’s sentiments, while others countered his statement.

While Richard took his time to respond to some of netizens’ rebuttals, he also didn’t let comments wishing him death pass.

The 47-year-old singer then reached out to his followers on Facebook to get hold of the ill-wishers, including a Grade 9 student and Cardi B fan from Cagayan De Oro City.

Richard earlier posted screenshots of the Facebook user John Ronald’s online rants against him. Prior to the public apology, the student said sorry to the singer in a private message.

But Richard said he will still file a case against the netizen even if he is a minor.

Richard related that he was able to talk to John Ronald as well as his parents, and he informed them of the “consequence” of their child’s actions.

“Although I accepted their apologies and forgave their child for his mistake (wishing death for me bec I disagreed with his taste), all three  of them understood clearly that I will still have to file the case (as consequence to his actions),” said Richard.

He added, “I applaud John for being brave to face the consequence, and not immaturely running away or avoiding it.”

On Friday, John Ronald issued a public apology on his personal Facebook account to talk about his learnings and realizations from the incident online.

Part of his message read: “I realized that wishing somebody to die is not good. My action was clearly inappropriate behavior.”

“I realized that it is unnecessary to viciously attack my family and friends if they do not like my taste in music (Cardi B) I do not have the right to dictate them whom they should (listen to) in the music field. And not make any impulsive judgements on them based on their personal choices and music taste.”

Aside from Richard, the netizen also offered his apologies to his parents, school and teachers.

He further stated that he was told by Richard to keep his admiration for his idols but to allow others to express their differing opinions.

Richard, meanwhile, offered to make a 15 to 20-minute call to John Ronald every month to “help and support him in his quest for change and accountability.”

“I want to check up on him and how he is doing, with ups and downs in his young life. I want to show him FIRST-HAND, we can DISAGREE about things (CardiB) and yet respect each other well,” said Richard.

Blackpink reveals upcoming album tracklist with a Cardi B collaboration