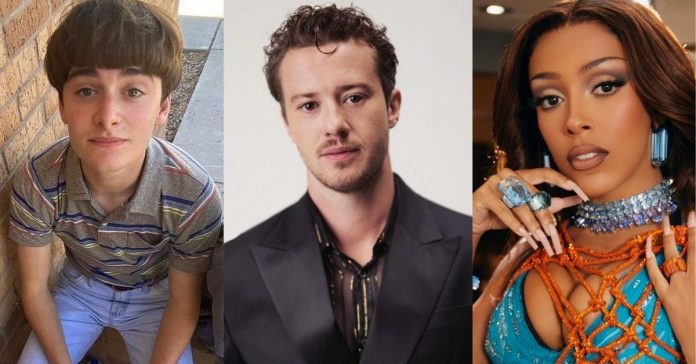 Yikes! It looks like Doja Cat is not happy with Noah Schnapp posting their messages online.

The American rapper slammed the Stranger Things star during an Instagram live, which has been recorded by US-based entertainment news outlet Pop Crave, and expressed how she was displeased with Schnapp sharing their direct messages with the public.

Earlier this week, Schnapp shared screenshots of his private conversation with Doja in a now-deleted TikTok video, where the rapper was seen asking him to set her up with his co-star, Joseph Quinn, who played Eddie Munson in the fourth season of Stranger Things.

In the said messages, Doja wrote: “Noah can u tell Joseph to hmu [hit me up]. wait no. does he have a gf [girlfriend]?”

To which the young actor wrote back: “LMAOO slide into his dms [direct messages],” followed by the rapper saying she could not find Quinn’s account and Schnapp sharing it with her.

Schnapp’s TikTok video about their exchange generated a lot of buzz online, but Doja was clearly not impressed about it.

In her Instagram live, the rapper spoke up on feeling uncomfortable about the incident and called out the Stranger Things star’s actions for being “socially unaware and wack.”

“That’s like borderline snake sh*t, that’s like weasel sh*t,” Doja said, but was also quick to clarify that she was not saying that the move “encapsulates his entire personality.”

“I made an assumption that he was gonna be chill about it and he went and shared information that I didn’t feel comfortable with him sharing,” the rapper added, as further quoted in her live by Hongkong-based lifestyle website Hypebae.

At the same time, Doja also said that she wanted to “be chill” about the situation, noting how Schnapp was a “kid” who was bound to make mistakes.

UPDATE: The 17-year-old actor, who was known for playing Will Byers in the hit Netflix series, took to the comments section of his recent Tiktok video on Thursday, July 14, to say that he has apologized to Doja Cat.

“Guys everything is all good I apologized and I still follow her and love her music no hard feelings ❤️❤️” Schnapp wrote.

Following the rapper’s reactions, netizens have taken to Twitter to air out their mixed reactions over the snafu between Doja and the young actor.

Some netizens expressed their distaste over Doja not choosing to settle the situation privately.

Others questioned why the 26-year-old rapper had asked the young actor to help set her up with his co-star.

While some also came to Doja’s defense.

Meanwhile, some netizens also poked fun about the situation and created memes.