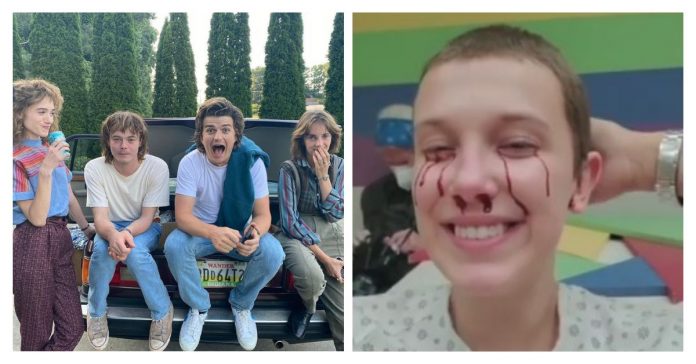 Volume 2 of Netflix’s hit series Stranger Things Season 4 just dropped last Friday and while fans were at the edge of their seats waiting to binge watch the season’s last two episodes, some of the actors from the show also shared their excitement for the premiere.

To mark the release of Season 4 Vol. 2, the cast members took to their respective Instagram accounts to share with fans some behind the scenes moments with their fellow actors on set.

Millie Bobbie Brown who plays Eleven “vlogged” her experience filming Season 4, sharing video clips of how she gets ready, some behind-the scenes look at key (spoilers!) moments of the show, and even snippets of her celebrating her 17th birthday.

The 18-year-old actress also captured a cute moment of her with actor Matthew Modine who plays Dr. Martin Brenner.

Finn made his Instagram post to announce the release of the last two episodes of Season 4, but it seems like he posted it a little too early— prompting a fun and witty comment from fellow actor Noah Schnapp who plays Will Byers.

Speaking of Noah, the 17-year-old actor was not about to miss out on sharing his own behind-the scenes moments.

It appears he also had an enjoyable time on set as he shared a video of him being in the receiving end of a hilarious water balloon attack.

Brett Gelman who plays Murray Bauman and Caleb McLaughlin who stars as Lucas Sinclair also had behind-the-scenes looks to share.

And in case you’re still having a hangover from the season finale, here are some other behind-the-scenes moments shared by the official Facebook page of Stranger Things.

Following the release of Season 4 Volume 2, the series, alongside names of its characters, has been trending on Twitter and has remained on the trend list as of posting.

Stranger Things is a sci-fi thriller television series created by the Duffer Brothers and is released on Netflix.

Set in the 1980’s, the show tells the story of Eleven, a girl with telekinetic powers, and her group of friends as they battle monsters from an alternate dimension, called the Upside Down.