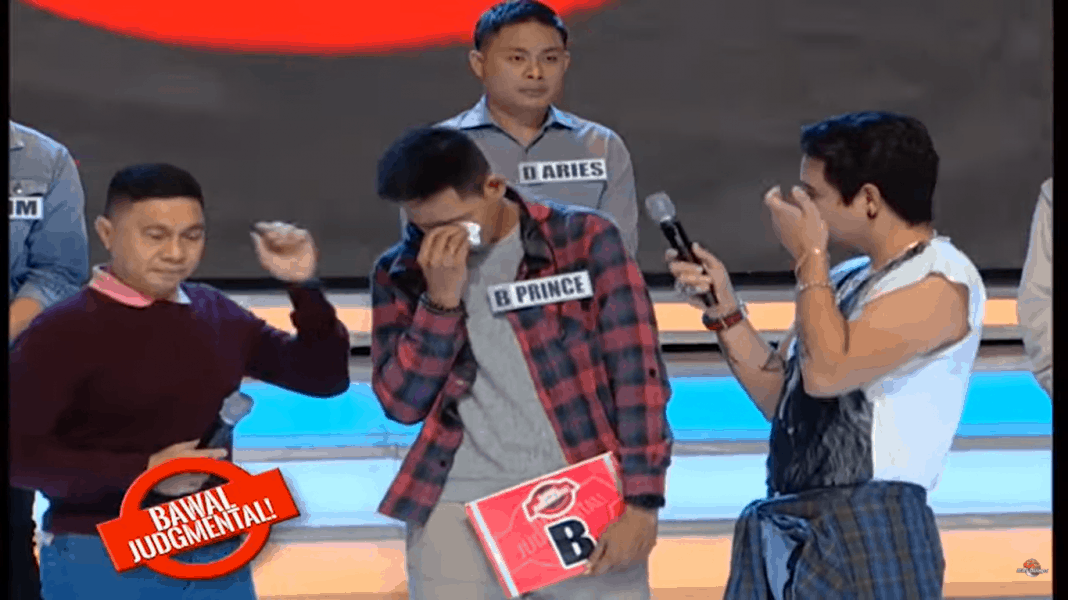 The segment became a top trending topic on Twitter for its episode that featured contestants who came out to their parents for the first time.

Other Eat Bulaga hosts and members of the audience were also moved as contestants shared their personal experiences and struggles in seeking acceptance from their family and the society.

Former beauty queen Melanie Marquez was the segment’s guest who was asked to judge or pick out four out of the seven contestants who still have not opened up about their gender identity and sexual orientation to their parents.

These contestants were praised for bravely revealing who and what they are for the first time on national TV.

A contestant named Aries shared that he still has not come out, afraid that he may be judged and be shamed among family members.

Another contestant named Prince revealed that the reason why he decided to out himself in Eat Bulaga is to put an end to and answer his son’s recurring question “Papa bakla ka ba?”

Prince had a wife but is separated from her. They have a four-year-old son.

He admitted he had a hard time figuring out how to explain it to his son at such a young age and thanked the segment for serving as a platform to share who he really he is.

It was also contestant Ronan’s first time to come out to his family. His mother said, “Tanggap ko nalang siya. Buong puso ko tatanggapin kasi anak ko siya,” to which her son responded with a hug and a kiss.

Meanwhile, contestant Jimar realized after graduating from college that he felt there was “something wrong” with him and shared that he fell in love with his guy best friend.

Upon knowing the truth, his mother jokingly requested if he could still give her a grandchild: “Sana kahit ganyan ka, mabigyan mo ako ng apo.”

“Be honest. Alam ko maraming masasaktan, pero they have to accept you if they love you. You’re fearless when you’re honest. You deserve to be happy, hindi yung sa dilim ka lang,” advised Melanie Marquez.

Netizens who were moved by the segment offered their salute to the contestants who courageously spoke their hearts out, and let everyone know that “being gay doesn’t make you less of a person”.

They also praised the segment for tackling another eye-opening topic. The show trended last month when they featured HIV positive contestants.