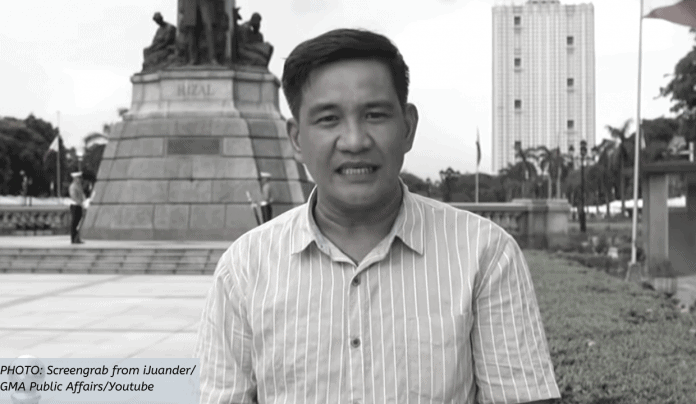 Broadcast journalist and film director Cesar Apolinario Jr. has passed away. He was 46 years old.

The Varsitarian, the official student publication of his former alma mater University of Sto. Tomas, reported that Apolinario succumbed to lymphoma.

In a statement, GMA Network said it was “deeply saddened by the passing of our Kapuso.”

“An award-winning broadcast journalist, writer, and director, Cesar will be greatly missed by his family, friends, and colleagues, especially those in GMA News and Public Affairs and in the film industry, where he devoted the best years of his life,” the statement said.

“A loyal Kapuso, his dedication to his craft as a news reporter, producer, and public affairs host will continue to serve as an inspiration to all. We join his entire family and loved ones in praying for his eternal repose.”

Colleagues from the broadcast industry also took to their social media accounts to express their sympathies and pay tribute to a “mentor” and “friend”.

GMA News anchor Raffy Tima also tweeted: “He was more than a colleague, he was a friend. There are no words. Godspeed and rest in peace @CesarApolinario.”

Meanwhile, Kapuso star Barbie Forteza, who starred in his film Puntod, said that Apolinario was the first to believe in her acting potential.

Apolinario graduated from the University of Santo Tomas with a Bachelor in Communication Arts degree in 1998.

He was best known for being a senior news producer at GMA News, and a news reporter for the news programs 24 Oras and Saksi.

Apolinario was also the co-host of GMA News TV’s iJuander alongside Susan Enriquez. The PMPC Star awarded iJuander as the Best Magazine Show in 2014.

He also did various GMA documentary shows such as I-Witness, Brigada and Born to Be Wild.

Besides being a journalist, he was also an award-winning independent film director. He directed the 2008 Metro Manila Film Festival entry Banal, which starred Christopher de Leon, Paolo Contis and Alfred Vargas, and won him the Best Director award.

His other films were Puntod, starring a then 12-year-old Barbie Forteza, in 2009, and Dance of the Steel Bars, which was topbilled by Dingdong Dantes, in 2013.

On his Twitter account, Apolinario described himself as “a person who will always try to understand what you really mean when you speak.”