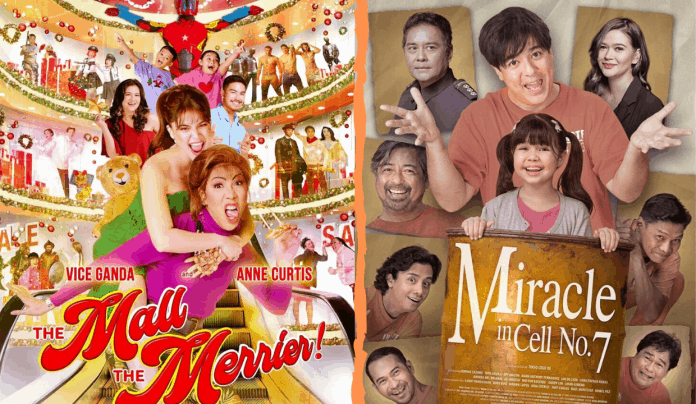 The list for the highest-grossing films of the Metro Manila Film Festival (MMFF) 2019 has been revealed, as its two-week run that began on Christmas Day ended on January 7.

According to MMFF spokesperson Noel Ferrer in a Facebook post, the eight MMFF entries earned a total of P995 million gross sales in the box-office, or 4.5 percent short of the P1 billion target.

In the same post, Ferrer detailed that “realistically, it would be hard to surpass last year’s record gross in the box-office because of the typhoon and the closing of some malls/cinemas in Visayas and Mindanao due to the earthquake.”

The MMFF 2018 remains the “highest-grossing ever” with P1.060 billion in earnings.

In no particular order, the four highest-grossing MMFF films of 2019 were: Miracle in Cell No. 7, Mission Unstapabol: The Don Identity, The Mall, The Merrier and 3pol Trobol, Huli Ka Balbon.

The MMFF committee agreed not to reveal the figures and rankings of the top grossers, leaving it to the prerogative of the producers to do so.

But a Pang-Masa report said Aga Muhlach’s Miracle in Cell No.7 led the box-office hits with P412 million, while Vice Ganda’s The Mall, The Merrier collected P320 million.

The Execom is also prepping up for the Metro Manila Summer Film Festival edition which happens on April 11 to 21.

Submission of finished films is also extended to February 15 instead of the original January 31 deadline.