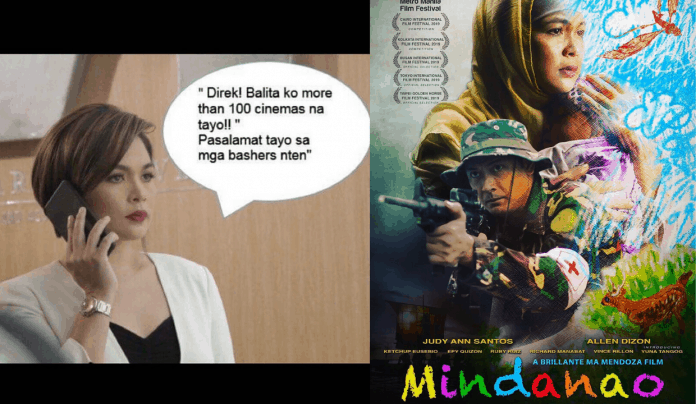 On Thursday, the Cairo Film Festival Best Actress shared the good news that Mindanao is already showing in over 100 cinemas nationwide.

For his part, direk Brillante said that the Mindanao team wasn’t aiming for the top spot in the box office.

“We don’t aspire to be number one. What we are celebrating is that a small film @mindanaothemovie from a small company @cspcoph can be a part of this big and popular film festival. Because of your clamor of more cinemas, we have now 100 cinemas,” the Cannes-winning independent film director said in a tweet.

A number of cinemas had initially dropped the film from their line-up due to low ticket sales.

Brillante and Juday had earlier appealed for more cinemas to screen the award-winning movie.

She even quipped about combining her and co-star Allen Dizon’s cash prizes (P100,000 each) so that the film could at least earn a profit.

A portion of the film’s earnings will be donated to Kythe Foundation that helps children with cancer and other chronic illness.

Mindanao revolves around the story of a Muslim mother caring for her cancer-stricken daughter while she awaits the return of her military medic husband.

Now on its 45th year, the Metro Manila Film Festival runs until January 7, 2020.