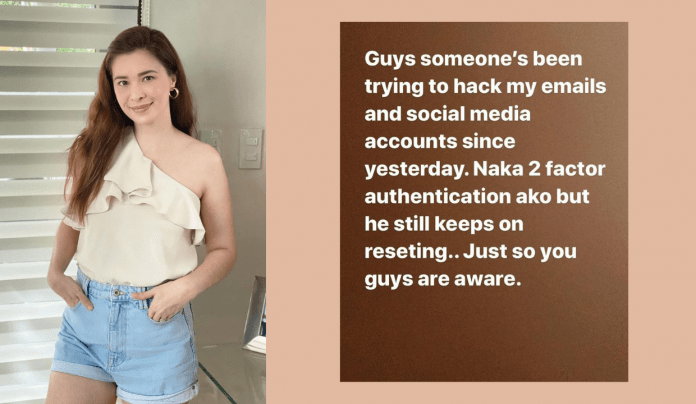 Actress Sunshine Cruz took to Instagram to inform her followers that there has been several attempts to hack her social media accounts.

In her Instagram stories, she warned her 2.4 million followers on the platform to be cautious of messages that could be coming from hackers.

She also advised them to be vigilant when receiving messages from unknown numbers, especially if their social media accounts have their personal information such as credit card details.

The Love Thy Woman star then shared that her Gmail account was already hacked but the matter is already undergoing investigation by Gmail. She suggested that all social media accounts should be equipped with two-factor authentication.

“Better to be safe than sorry,” she wrote.

Her following updates showed that her hacker was trying to get in touch with her.

“I immediately changed my cellphone number sa 2 factor authentication, changed my e-mail address. And I think I won the battle,” she said in another post.

Despite reporting that she may have “won the battle” already, her last social media post said that the hacker is still trying to get a hold of her accounts.

“I’ve changed my cellphone no. several times as well as my e-mail. Ganun pa din. Grabe,” she wrote.

As of writing, Sunshine has already deactivated her Instagram account. In a media conference for Love Thy Woman, she explained that she deactivated her account as a protective measure from the hacker.

Just a month ago, fellow Kapamilya star Angel Locsin revealed that there were repeated attempts to hack her online accounts.