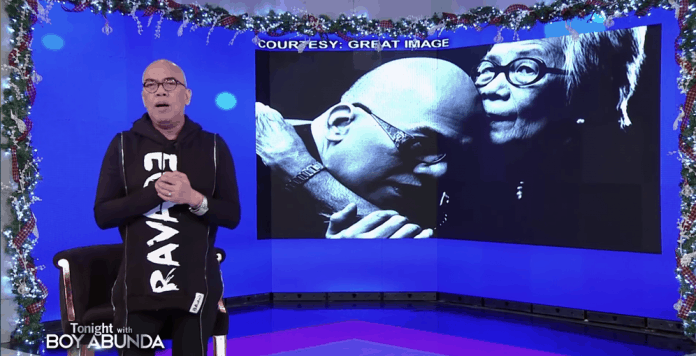 Licerna “Lesing” Romerica Abunda was 90 years old when she passed away last December 1. Just last month, the veteran host announced on his other talk show, The Bottomline, that his mother had been in the hospital for two weeks.

“Tanggap ko po. I’m going through very difficult times. These are tough times for us, lalo na po sa aking pamilya,” he said, adding that his mother’s death was especially hard on him since his mother is the “center of his life.”

The King of Talk admitted he does not know how to move on but he continues to commit himself to work, knowing it’s what his mother wanted for him.

Boy turned emotional after recalling how his family was there for him during this hard time. He continued on to share that the moment his mother passed, he continued to work at his talk show at night.

“Ayoko pong hindi harapin ang pain na to. I want to confront it. I want to meet it head on. Sabi ko nga madalas, kailangan damdamin yung buong process ng pain because I don’t want to be overpowered by it, but I process to be a better person, to be a better tito,” he ended.