TMC is now on GSAT 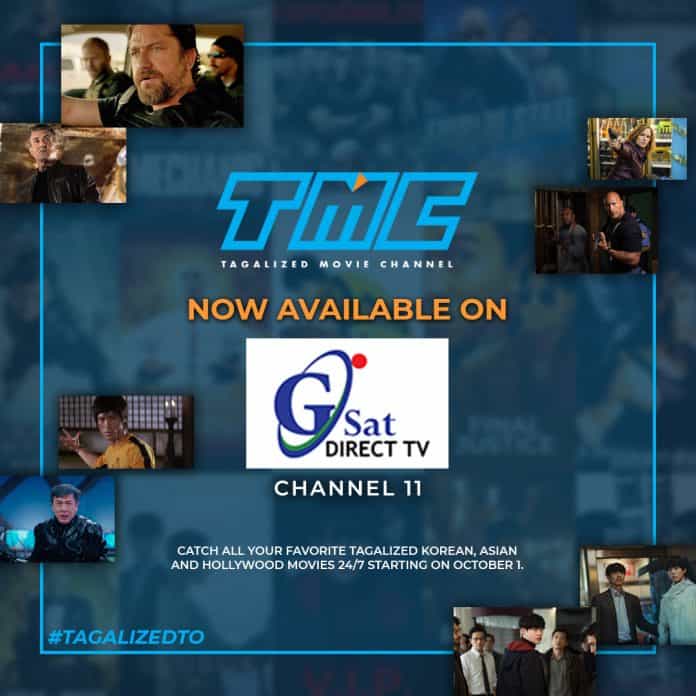 The first and only 24/7 Tagalized Movie Channel in the Philippines, also known as TMC, continues to expand its library of Asia, Korean and Hollywood movies on Global Satellite (GSAT) starting on Oct. 1, 2021.

GSAT, as the source of international entertainment and information in areas beyond the reach of cable television, now showcases international blockbuster hits, critically acclaimed films, romantic comedies, action thrillers, and many more.

Born out of response to the growing demand for a better direct-to-home satellite TV provider across the Philippines, GSAT is dedicated to “Achieve GSATisfied Viewing at Home” along with their tagline. On the other hand, TMC is committed to featuring Tagalog-dubbed movies; thus, many Filipinos can relate more to the scenes. With this, it’s really “Mas Masaya ‘Pag Tagalized,” TMC’s tagline, for the audience. The mutual partnership of TMC and GSAT gives Filipinos the best viewing experience in the comfort of their homes during these trying times.

For the October highlights, TMC is serving audiences various films with different genres from around the world every day. Starting the week is TMC’s Feel Good Mondays from 8 pm to 10 pm. Inspiring films about life, achieving dreams, love relationships are some stories that are featured in the program block. Catch prominent actors and TV personalities James Corden, Keanu Reeves, Winona Ryder, Lee Je-Hoon, Eddie Peng, and Shu Qi.

Slasher films, suspense and spine-tingling horror are the highlights for Tues Thrill. Starting 10 pm to 12 am every Tuesday, movies like “Ju-on: The Final Grudge,” “Clown,” “School Tales” and “The Taking of Deborah Logan” will surely keep you awake and entertained all night.

Primetime viewing has never been better with the best of Asia, Korean and Hollywood movies every Wednesday to Friday starting from 6 pm onwards.

TMC continues to showcase with the likes of these Korean movies: “The Battleship Island”, “My Annoying Brother”, “The Last Princess”, “RV: Resurrected Victims”, and a lot more in K-Nights, 10 pm to 12 am, Wednesdays to Fridays. With its most extensive Korean library in one channel, TMC presents the highest-grossing Korean cinema films with known actors Song Joong-Ki, Doh Kyung-Soo, a.k.a. D.O., Jo Jung-Suk, Kim Rae-Won, and Son Ye-Jin.

Double the excitement every weekend movie viewing with megahit movies perfect for movie marathons, every Saturday and Sunday.

Every Sunday at 8 pm is a family bonding with movie premieres. Don’t miss “You Call It Passion” on October 3, starring Korean superstars Park Bo-young and Jung Jae-young for October premieres. “The Bad Guys: Reign of Chaos” premieres on October 10, which stars prominent Korean actors Ma Dong-Seok, Kim Sang-Joong, Kim Ah-Joong, Jang Ki-Yong. Two other movies will also premiere this month with “Extreme Job” and “Boyka: Undisputed” on Oct. 17 and 24, respectively.

It’s a movie feast this October with TMC, especially that it is now on GSAT. Catch all Tagalized Asian, Hollywood, and Korean movies 24/7. TMC is available on GPINOY and GSAT HD CH. 11, package of 99, 200, 300, and 500. Visit TMC and GSAT Facebook pages for more details. Mas Masaya ‘Pag Tagalized!